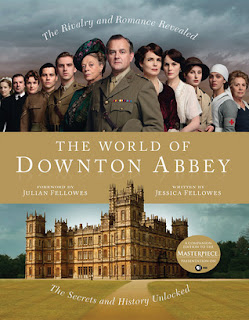 This is less a review and more of a gushing post, over this book as well as the series in general. I discovered Downton Abbey around November 2011, if I’m recalling correctly, and stayed up well into the night watching the first five episodes of season 1 on Netflix. I love everything about this show, especially that opening music. I always get a thrill when the opening first comes on, even though I’ve watched both seasons multiple times now. The World of Downton Abbey was released in December from St Martin’s Press, but I didn’t pick it up until after season 2 had finished airing on Masterpiece Classic.
What’s nice about this book is that it isn’t just about the show of Downton Abbey. It talks about the real world of this time that Downton’s based on, and gives information from actual butlers and maids, as well as information from the higher class. It covers 9 areas of interest: family life, society, change, life in service, style, house & estate, romance, war, and then a behind the scenes look at the cast and crew of Downton Abbey. I’d have to say my least favorite chapter was the war chapter, because war has never been one of my interests. I have a three way tie for my favorite chapter between society, life in service, and house & estate. It’s fascinating to read about the division of classes, the give and take between them. Especially interesting was those who work in service. Nowadays it seems like you’re looked down upon if you have work like a maid or something similar, but then it was considered the best kind of work you could have. And then, as now, you were lucky to have a job at all.
English nobility has always been a fascination of mine, mostly stemming from what we see of them in Jane Austen’s novels. I love seeing how they change over the years, and also seeing how little they really do change. Sometimes it seems as though mostly the only change is in fashion, but that’s not entirely it. Ideas and what’s commonly accepted also shift gradually over the years. In Jane Austen’s time I doubt it would’ve been at all acceptable for a woman like Lady Sybil to marry the chauffeur. While in Lady Sybil’s time it is possible. Still not excepted totally, but with the war bringing change it’s not as outlandish as it once would have been.
Reading The World of Downton Abbey has only rekindled my passion for this series, and has made me want to look for similar things to watch and read while waiting for season 3. Another similar movie would be Glorious 39, set during World War II, about a family much like the Crawley’s. It’s more of a mystery, but was definitely enjoyable. Novels that I’ve been acquiring to read include The House at Riverton by Kate Morton, The House at Tyneford by Natasha Solomons. Nonfiction books that I’ve gotten to read include To Marry an English Lord by Gail MacColl and Carol MdD. Wallace, and Lady Almina and the Real Downton Abbey: The Lost Legacy of Highclere Castle by the Countess of Carnarvon. The former served as inspiration for Downton, and the latter will be highly interesting since it’s the history of the location of Downton Abbey. I can’t wait to dig into all of these.
If you love Downton Abbey as much as me and many many others, I definitely suggest getting The World of Downton Abbey. Chock full of fascinating information about the show itself and the history of the time it’s set in, and the people, you’re sure to enjoy this. A perfect way to pass the time until season 3 comes early next year.