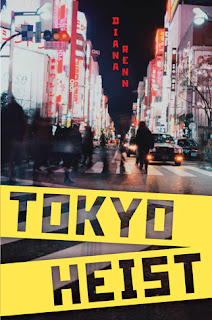 This was a fun read, especially while on vacation. I love Japan and almost anything to do with Japan, though I’ve never once visited. I’ve been looking forward to reading this book ever since I discovered it a couple months ago, and I was not disappointed.
I always love these whodunit mysteries that always leave you guessing. You think it’s character A because it’s so obviously character A, and yet you question your guess because that’s TOO obvious. I’m always unsure of my guesses because of this, and maybe that just highlights a character flaw about myself, but I can’t be the only one like that. Everytime Violet latched on to a new suspect I was like OF COURSE! How could it not be them?! Only to find out, well yeah that’s why it couldn’t have been them… Some people might get frustrated with those kinds of stories but I love them. In the end I wasn’t really all that surprised by one of the involved suspects, but I was just a touch disappointed because I’d liked what we see early on of that character.
Violet has to be one of my favorite characters of all time. She’s just so real. Bursting with ideas, but also the insecurity that virtually everyone deals with at that age. She’s very creative and artistic. I love how she’s drawing her own manga and using that as an outlet for figuring out her ideas on the case. I also love how she uses kimono fabrics to create scarves. Absolutely adore that. All the secondary characters are great as well, and I would have liked to have seen more of Edge, even though romance isn’t really the focus of the book. I’m just a romantic, what can I say? The only thing that marred this book in any way for me was how readily the FBI were taking tips from a teen. That seems a tad bit unrealistic, but then again what do I know? Anything is possible.

One Response to “Review: Tokyo Heist by Diana Renn”