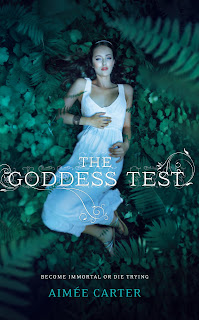 Summary from GoodReads:
It’s always been just Kate and her mom—and her mother is dying. Her last wish? To move back to her childhood home. So Kate’s going to start at a new school with no friends, no other family and the fear her mother won’t live past the fall.

Then she meets Henry. Dark. Tortured. And mesmerizing. He claims to be Hades, god of the Underworld—and if she accepts his bargain, he’ll keep her mother alive while Kate tries to pass seven tests.

Kate is sure he’s crazy—until she sees him bring a girl back from the dead. Now saving her mother seems crazily possible. If she succeeds, she’ll become Henry’s future bride, and a goddess.

My thoughts on The Goddess Test:
I first started seeing the cover for this around some blogs and that is intially what drew me in. When I saw it was available on netgalley I immediately clicked REQUEST and was so excited when I got approved for it. I had high expectations for this book, and while they were just shy of being reached, I really did like this book.

I liked Kate. Devoted to her ailing mother, down to earth, generous. And more forgiving sometimes than I might be. The one thing I didn’t like about her was her sudden switch from not believing a single thing Henry was telling and showing her, to OMG I have to get Henry to fall in love with me because I don’t want anything to happen to him. I would’ve liked a little more build-up to it. Now for Ava. I hated her, then thought she had redeemed herself, and then BOOM. Behaved in such a way as to make her hard to like. But again, she redeemed herself and then BAM. You’ll have to read for yourself to know what the BAM is about because WOW. Was not expecting that. Am I the only one not captivated by Henry? Because he didn’t do anything for me. He seemed to resign himself to being with Kate, since Persephone was no longer available.

I did like all the big reveals at the end though. Didn’t see any of it coming. You think you know one thing, and then that ending comes along and ruins all those guesses you had in the back of your mind. Of course, I sometimes miss the big picture, so I don’t always guess accurately at what might happen. I’m definitely looking forward to seeing what Kate does out in the world, away from Henry.

Goddess Interrupted will be out next year, and just the title alone, specifically the word interrupted, intrigues me. What will be interrupting her? Overall, a very good debut!

3 Responses to “Review: The Goddess Test by Aimée Carter”