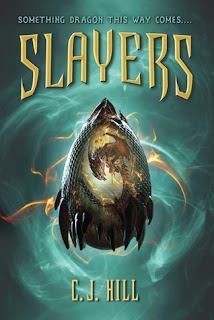 Summary from Goodreads:
Dragons exist. They’re ferocious. And they’re smart: Before they were killed off by slayer-knights, they rendered a select group of eggs dormant, so their offspring would survive. Only a handful of people know about this, let alone believe it – these “Slayers” are descended from the original knights, and are now a diverse group of teens that includes Tori, a smart but spoiled senator’s daughter who didn’t sign up to save the world.

The dragon eggs have fallen into the wrong hands. The Slayers must work together to stop the eggs from hatching. They will fight; they will fall in love. But will they survive?

Slayers was a fun, adventurous read. It was also kind of cinematic with it’s opening chapter, and then the last chapter wraps everything up while still leaving it open for a sequel. Just like a movie!
In the first half of Slayers Tori got on my nerves. She acted like the stereotypical rich girl at camp, not wanting to do what the others were doing and thinking she could do her own things. But thankfully that all changed when she realized the gravity of their situation. All the supporting characters were good, although two of the girls I just didn’t like. They were pretty nasty for no apparent reason, other than Tori being new and rich.
And just to warn those who might not like them, or those that do, there is a long triangle in this. I don’t love them or hate them, it all just depends on individual books. This time I wasn’t so pleased with the long triangle, only because I decided right from the beginning who I thought she should be with, so I didn’t enjoy time with the other guy. Thankfully though it looks like the one I chose might be in the lead.
The story itself was good. The pacing was just right, not too slow but not too fast. I wasn’t able to predict anything, which made me happy. Others might though. Plenty of action, romance, and dragons. I would have liked to see a little more of the dragons, but maybe in the sequel if there is one.
Slayers is definitely a worthwhile read, and you’re sure to devour it if you love dragons. There’s no news yet on whether there will be a sequel, but I for one would like one to look forward too.