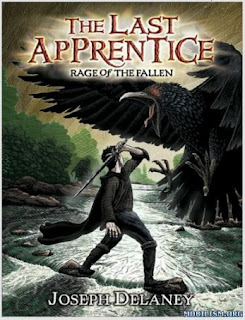 Summary from Goodreads:
A dangerous few months lie ahead—ones which some of us will be hard-pressed to survive.

Thomas Ward has served as the Spook’s apprentice for three years. He has battled boggarts, witches, demons, and even the devil himself. Tom has enemies: The Fiend stalks him, waiting for a moment of weakness. The terrifying Morrigan, goddess of witches, warned him never to step foot on her homeland, Ireland.
But now war has consumed their own country, and Tom, his friend Alice, and the Spook must flee to Ireland. The dark rages strongly there. No one can be trusted. Can Tom defeat the creatures that hunt him most fiercely?

Tom has just about everyone after him in the latest installment of The Last Apprentice series! The sister of a witch he killed with Bill Arkwright, the Morrigan, and of course the Fiend. I’m surprised Grimalkin isn’t after him. Each enemy is dealt with in various ways that connect with each other, coming about like the domino effect. But with consequences they were aware of, but had hoped wouldn’t come about. Tom keeps moving closer to the dark in order to fight it, which of course Old Gregory has issues with, but ends up going along in the end.

With only one year left until his apprenticeship is over it’ll be interesting to see how everything progresses, and where things will go now. With Grimalkin’s help, Tom has bought time to find an overal solution to the problem of the Fiend, but also gained even more enemies among the dark than he had before. And I definitely can’t wait to see what happens between Tom and Alice now.

This is book eight in the Wardstone Chronicles, to see the order of all the books, go here. A new book will be out in October, although I think it is just a companion novel about Grimalkin, which should be interesting!