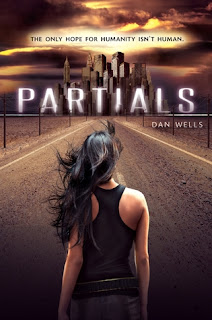 Humanity is all but extinguished after a war with partials—engineered organic beings identical to humans—has decimated the world’s population. Reduced to only tens of thousands by a weaponized virus to which only a fraction of humanity is immune, the survivors in North America have huddled together on Long Island. The threat of the partials is still imminent, but, worse, no baby has been born immune to the disease in over a decade. Humanity’s time is running out.
When sixteen-year-old Kira learns of her best friend’s pregnancy, she’s determined to find a solution. Then one rash decision forces Kira to flee her community with the unlikeliest of allies. As she tries desperately to save what is left of her race, she discovers that the survival of both humans and partials rests in her attempts to answer questions of the war’s origin that she never knew to ask.
Combining the fast-paced action of The Hunger Games with the provocative themes of Battlestar Galactica, Partials is a pulse-pounding journey into a world where the very concept of what it means to be human is in question—one where our sense of humanity is both our greatest liability, and our only hope for survival.

I almost gave up on Partials. I started it in early March, and it just wasn’t grabbing me, even 150 pages in. Too much worldbuilding and setup and not enough story movement. So I put it down for nearly a month. Then I picked it back up again, because I don’t like to not finish a book if I can help it. I know a lot of people have a 50 page rule, or even up to 100 page rule, but I don’t. I have more of a time rule. If it takes me too long to get even halfway through, like the year it took me to get have way through the first Shannara book, then I give up. Partials is divided into three parts, and the first part is the slowest and hardest part to read. That may be off-putting to some of you, but it is worth it to get through that first part. I’m very glad I did.
The second two parts have tons of action and story movement. I liked most of the characters well enough, though they didn’t really feel their ages to me. Kira was supposed to be 16, but she felt older than that. But that could also work since in a world like theirs, especially with something they have called The Hope Act, you would have to grow up hard and fast. I didn’t like Marcus, who was Kira’s love interest. First we don’t really see him all that much, and second even when we did see him I have to admit he kind of acted oppressive. Definitely not attractive. I liked the Partial Samm even more, and definitely want to see the interaction between him and Kira in the second book. For the most part though, the story is definitely lacking in the romance department.
Partials was one of my most looked forward to books in 2012 so far, and I have to say it didn’t quite meet up with my expectations, but in the end it didn’t fall too short either. I will definitely be reading the sequel, especially since more questions were asked than answered, and I have to know what happens with all the different things going on.

One Response to “Review: Partials by Dan Wells”