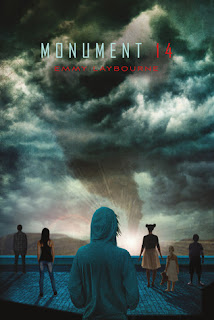 So I have kind of a funny story that goes along with this book. I checked it out from the library on July 20, day 1 of my ten day vacation from work. It’s a hot and humid day, and because of the humidity I knew it was likely that we’d have some kind of storm. Just as I was walking into Walmart with my mom for lunch at the Subway inside there was already rain coming down fairly hard outside. I brought in Monument 14 to read while we ate. Now, Monument 14 gets started with the end of the world things right away with a huge hailstorm at the very beginning. Then the kids get trapped in this supermart store, and I’m currently eating in a supermart store with my own storm going on outside. Plus, the lights in Walmart were flickering. CREEPY. Needless to say, I was kind of paranoid for an hour or two after that.
Anyways, that attests to Emmy Laybourne’s writing, because she was very good at describing stuff in such a way that my own surroundings helped add to the atmosphere of the book. It’s not very often I get a reading experience like this one, and while it was creepy in the extreme it was also fun. I then proceeded to ignore the book for a week or so though, until I no longer had this lingering sense of doom hanging over me. Overall I really enjoyed this book. The story is definitely intriguing and I’m amazed at the strength these kids had to keep going, even when everything in their life has completely turned around.
I only had two issues with this book. It’s told from Dean’s point of view, from his journal I would assume given the way it’s written. All of the other characters had distinct personalities, but Dean kind of felt bland. Like there wasn’t really that much to him, just no personality really. The other issue was that I would have liked a little bit more information on what was going on in the rest of the country, in addition to their day to day lives surviving in a Greenway. We got a little bit of info at the beginning, but then didn’t get anything else until the end of the book.
I would definitely recommend this for those who love disaster/post apocalyptic stories. While the pacing can drag at times, this definitely paints a grim picture of what could be a possibility in our future. Just make sure to read it when you have good weather!

One Response to “Review: Monument 14 by Emmy Laybourne”