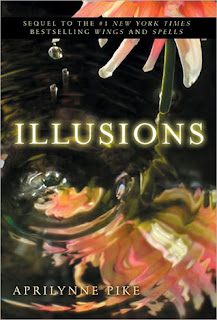 Laurel hasn’t seen Tamani since she begged him to let her go last year. Though her heart still aches, Laurel is confident that David was the right choice.
But just as life is returning to normal, Laurel discovers that a hidden enemy lies in wait. Once again, Laurel must turn to Tamani to protect and guide her, for the danger that now threatens Avalon is one that no faerie thought would ever be possible. And for the first time, Laurel cannot be sure that her side will prevail.

As of right now, Spells is still my favorite book in this series. Illusions maybe second. But overall I was not as impressed with the third book in this series as I was with the second. Spells had this atmosphere because of the time Laurel spends in Avalon. In Illusions, we only get one or two quick trips that don’t last long enough.

I’m not going to say who’s team I’m on, just for those who have not read this series yet. Most of you have, but not all. I quite liked having Laurel know she was attracted to two guys, but set firmly in her decision of one of them. We didn’t have any of that indecision that comes with love triangles in Spells. Illusions made up for that though. So much indecision that it went in a way I was not expecting, but then again half expecting in one aspect. That is the kind of love triangle I’m not fond of. I like the ones where the girl is set, and even though the one guy she doesn’t choose fights for her, she never deviates. I must say I was disappointed in Illusions for going the other way.

And lastly, story-wise there just didn’t really seem to be a whole lot going on. We don’t really get an antagonist until slightly more than halfway through the book, and even so they’re an absent antagonist. They don’t really do anything until the big reveal of things at the very end in the last couple of chapters. And by the way, except for one random troll attack in the middle of the book, the only other action happens at the very end

The thing that saves Illusions for me though is what is revealed in the last quarter of the book. I’m definitely looking forward to seeing where that’s taken in Destined. Illusions is a must read if you’ve already started this series, just beware that it might not live up to your expectations.