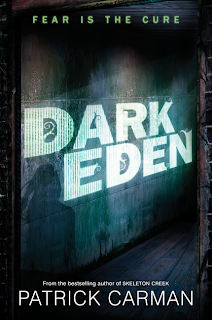 Summary from Goodreads:
Fifteen-year-old Will Besting is sent by his doctor to Fort Eden, an institution meant to help patients suffering from crippling phobias. Once there, Will and six other teenagers take turns in mysterious fear chambers and confront their worst nightmares—with the help of the group facilitator, Rainsford, an enigmatic guide. When the patients emerge from the chamber, they feel emboldened by the previous night’s experiences. But each person soon discovers strange, unexplained aches and pains. . . . What is really happening to the seven teens trapped in this dark Eden?

I’m going to be honest right off the bat and say this book didn’t scare me. I was kind of hoping it would, but it definitely did not. It was a little creepy, but they’re not the same. I didn’t dislike it, but I didn’t love Dark Eden. It is a bit thought provoking though, when you begin to think about fears, and what you’re truly afraid of. For me, my fear is death, and I don’t know how I could possibly overcome it. It would be nice if there was a cure for phobias.
The MC is Will Besting. I have to say I don’t often read books from the point of view of a male character, mostly because not as many are written as with female MCs. Another reason though is just because I can never really relate to a male character so I don’t get as involved with them as I would otherwise. It was interesting to discover what happens to the other characters through Will, and get his thoughts about what was happening. I didn’t feel like they were all fleshed out well enough though. We only barely scratched the surface of most of these characters, and it felt like they were just props to push the story forward.
The story itself, near the end, was a little confusing for me. What is revealed about Rainsford left me with more questions than Dark Eden answered. Why is the number 7 so important? Why does the process work the way it does, and how did Rainsford discover that process? I have to admit that I’m definitely left curious enough to read the second book coming out next year, Eve of Destruction.