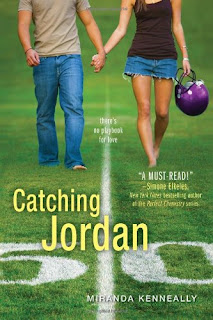 What girl doesn’t want to be surrounded by gorgeous jocks day in and day out? Jordan Woods isn’t just surrounded by hot guys, though – she leads them as the captain and quarterback on her high school football team. They all see her as one of the guys, and that’s just fine. As long as she gets her athletic scholarship to a powerhouse university. But now there’s a new guy in town who threatens her starring position on the team… and has her suddenly wishing to be seen as more than just a teammate.

So night before last I’m climbing into bed. Literally, I have a loft bed and the ladder broke so I’m using a combination of chair to stool to bookcase to bed. I took Catching Jordan with me, because for some reason now I always fall asleep when I read in bed, no matter which book it is. I figure I’ll get a few pages in before I fall asleep. WRONG! And that’s how awesome this book was. It kept me up so long that I only got maybe 2 hours of sleep. I couldn’t even finish it that because I got so tired. Finished it the next day.

I’ll be honest, I’m not a fan of football. So you’re probably thinking to yourself, why did I even buy it? First of all, I’ve heard awesome things about it and that piqued my interest. Second of all, I may slowly be changing my mind about football because of a friend. So even though I had no idea what was going on in the actual game or practice parts of the book, I still enjoyed this.

Jordan is hilarious. I love her. I want to be her. She has all this spunk and courage. Major courage to want to play in such a rough sport that can make or break you. And she really was just one of the guys. All these guys she’d grown up with, and they had absolutely no problems with a girl on the team. This was such a tightly knit team I don’t think anything could’ve broken them. Extreme loyalty barely begins to touch on how close these people are. My favorites were definitely Carter and JJ, even Jake sometimes. My favorite of all though was Henry, one of the most awesome best friends you could possibly have. All of the characters in this book felt real. And I loved her parents. Even her dad, who was initially an a-hole, but came through for his only daughter when it mattered.

Now, I came into this book not expecting a love triangle, but there was one. It was gradual though, not right off the bat. I started off rooting for one guy, but definitely changed my opinion not even halfway through the book. The only thing I didn’t enjoy was how weepy Jordan got sometimes. Such a strong girl reduced to so many tears. Other then that, this has been one of my favorites so far of 2012. I will most definitely be reading anything Miranda Kenneally writes in the future, especially the companion novels that are coming out this year and in 2013.