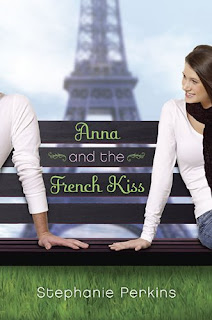 Summary from GoodReads:
Anna is looking forward to her senior year in Atlanta, where she has a great job, a loyal best friend, and a crush on the verge of becoming more. Which is why she is less than thrilled about being shipped off to boarding school in Paris—until she meets Étienne St. Claire: perfect, Parisian (and English and American, which makes for a swoon-worthy accent), and utterly irresistible. The only problem is that he’s taken, and Anna might be, too, if anything comes of her almost-relationship back home.

As winter melts into spring, will a year of romantic near-misses end with the French kiss Anna—and readers—have long awaited?

My thoughts on Anna and the French Kiss
Let me just start by saying that honestly there was not a single thing I disliked about this book. I’ve been wanting a book like this for who knows how long. I don’t read quite as many contemporary books as I do paranormal, fantasy, some science fiction, etc., mostly because they almost never quite live up to what I fantasized about as a young teenager dreaming of romance years ago. Often they’re good, but not stellar. With this book though, it not only lived up to those old day dreams, but exceeded them.

I lived for the moments St. Clair and Anna spent togther, whether they were alone or with friends. Anna felt real to me. The way she acted, and reacted to things, exactly how I would imagine someone would behave in those situations. And St. Clair is one of the most swoon-worthy leading male characters I’ve met in a very long time. There were moments between them where I literally, at work in the breakroom, squealed out loud and laughed out loud.

The descriptions of Paris were lovely. I visited the city a number of years ago, so it was fun trying to see if I could remember certain parts they were in. And the writing style definitely did not feel like that of a new writer. It was exceptionally well done, and Stephanie has an incrediblely unique voice. I will most definitely be checking out the companion novels to this one as they become available.

Anna and the French Kiss has definitely landed on my small pile of books that I reread at least once or twice every year. I definitely recommend it to anyone interested in YA books, but especially those that prefer the contemporary genre. Don’t pass this one up!

7 Responses to “Review: Anna and the French Kiss by Stephanie Perkins”