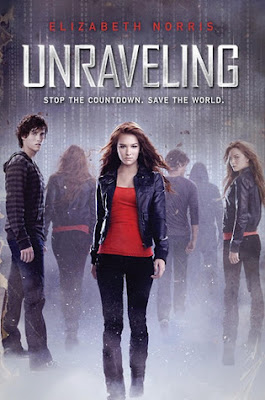 Two days before her junior year, Janelle Tenner is hit by a pickup truck and killed —as in blinding light, her life flashing before her, then nothing. Except the next thing she knows, she’s opening her eyes to find Ben Michaels, a loner from her high school whom Janelle has never talked to, leaning over her. And though it isn’t possible, she knows with every fiber of her being that Ben has brought her back to life.

But her revival, and Ben’s possible role in it, is only the first of the puzzles that Janelle must solve. While snooping in her FBI agent father’s files for clues about her accident, she uncovers a clock that seems to be counting down to something — but to what? And when someone close to Janelle is killed, she can no longer deny what’s right in front of her: Everything that’s happened—the accident, the countdown clock, Ben’s sudden appearance in her life—points to the end of life as she knows it. As the clock ticks down, she realizes that if she wants to put a stop to the end of the world, she needs to uncover Ben’s secrets—and keep from falling…

This is one of the most awesome books I’ve ever read. And it’s huge, with so many things going on all the time throughout the story that there was never a point that dragged for me. As you’ll know if you’ve read the summary, Janelle dies and is brought back to life. What I didn’t expect was for it to happen right off the bat, but it did.

Janelle is also one of the most kick-ass characters I’ve ever met. Her dad is an FBI agent, so she knows more than an average girl her age would know about things going on with the FBI, and also how to protect herself. Eli gives her crap every time they meet, but Janelle just rolls with the punches and deals them right back with ease. I’d love to be like her. Her dad’s partner, Struz, was awesome as well. Kind of like an older brother to her, it was apparent that he was part of the family.

There are so many twists and turns in this story that I have to say I never saw what was coming. When it was revealed what the countdown was to, I initially was disappointed because I wanted the book to continue in the way it had, as an FBI action thriller. As I kept reading though the real cause for the countdown grew on me, and ended up making the story more awesome than it would’ve been had it gone the way I wanted it to.

All in all, if Goodreads had the option it would definitely get 6 starts out of 5. These characters felt so real, that when certain stuff went down with people she knew, I choked up. I felt connected to these people, and definitely cared about what happened to them. This is probably the best debut I’ve ever read and I seriously cannot wait to read more by Elizabeth Norris.