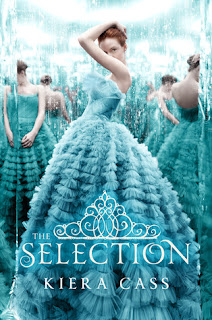 For thirty-five girls, the Selection is the chance of a lifetime. The opportunity to escape the life laid out for them since birth. To be swept up in a world of glittering gowns and priceless jewels. To live in the palace and compete for the heart of the gorgeous Prince Maxon.


But for America Singer, being Selected is a nightmare. It means turning her back on her secret love with Aspen, who is a caste below her. Leaving her home to enter a fierce competition for a crown she doesn’t want. Living in a palace that is constantly threatened by violent rebel attacks.


Then America meets Prince Maxon. Gradually, she starts to question all the plans she’s made for herself- and realizes that the life she’s always dreamed of may not compare to a future she never imagined.

First of all what drew me to this book is pretty much the same as what has drawn everyone initially. That cover, oh my. That is one of the most eye-catching covers I have ever seen. If I had no idea about this book before being published and only found it afterwards sitting on a bookshelf in the bookstore, I’d probably buy it without even looking at the inside flap. That’s how stunning the cover is. We all know that saying don’t judge a book by its cover, but come on. We all do it. And seriously, the cover is the first thing we see about a book, that first initial draw. It helps when it looks this good.

America was an interesting character. She was strong and definitely opinionated when it came to Prince Maxon and their two different worlds. I enjoyed the other girls in The Selection as well, for the most part. Some seemed really sweet, though most were just barely mentioned in passing, and usually only when they were sent home. I had a problem with that at first, but after giving it thought I decided it works that way, since I don’t want a big chunk of the book to be information on all 35 girls. That would’ve definitely taken away from the story. I would have liked to have seen more of Maxon’s mother and father, especially the mother since she was also chosen from The Selection. I’m guessing based off something said in the book though that we’ll be seeing more of her in the sequel. I have to say that Kiera Cass made it really easy to choose which side of this love triangle I’m on. I get the reasons behind the way one of the guys acted, but once I saw how the other one was, I knew who I was rooting for.

The story itself was very enjoyable. I ate this book up. I would have liked more worldbuilding though. More information about the world in general, but also more about Illea specifically. Like how the castes came about. How was it decided who would be in which caste? And how did Maxon’s family end up ruling? Something was mentioned about that, but didn’t go in depth at all.

The Selection doesn’t quite end on a cliffhanger, but it ends in such a way that is frustrating but at the same time makes you really wish you had the sequel in your hands so you could continue right away. I will definitely be reading the next in this trilogy when it becomes available, and buying The Selection as soon as it is released for my personal library.

4 Responses to “Early Review: The Selection by Kiera Cass (ARC)”