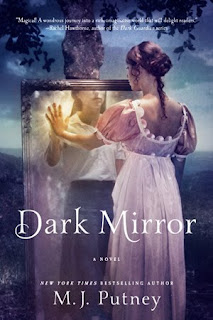 
Summary from Good Reads:
Lady Victoria Mansfield, youngest daughter of the Earl and
Countess of Fairmount, is destined for a charmed life. Soon she
will be presented during the London season, where she can choose a mate worthy of her status.

Yet Tory has a shameful secret—a secret so powerful that, if
exposed, it could strip her of her position and disgrace her family forever. Tory’s blood is tainted…by magic. When a shocking accident forces Tory to demonstrate her despised skill, the secret she’s fought so hard to hide is revealed for all to see. She is immediately exiled to Lackland Abbey, a reform school for young men and women in her position. There she will learn to suppress her deplorable talents and maybe, if she’s one of the lucky ones, be able to return to society.

But Tory’s life is about to change forever. All that she’s ever known or considered important will be challenged. What lies ahead is only the beginning of a strange and wonderful journey into a world where destiny and magic come together, where true love and friendship find her, and where courage and strength of character are the only things that determine a young girl’s worth.


My thoughts on Dark Mirror:
Given that I’m not the biggest fan of WWII fiction, I was pleasantly surprised by this book. While starting off a little slow for me, it soon grabbed me and just would not let go. I was reading this every spare moment I had the last  few days.

Lady Victoria Mansfield, better known as Tory, was a remarkable character for me. I loved that she adapted so quickly to the drastic changes in her life, with little drama. She handles her new roommate exceptionally, taking everything in stride, and easily makes friends with some of the other ladies.

Quickly learning more about her powers drew her ultimately to the Labyrinth, where she was able to get much closer to a number of fellow students and one of her teachers. And it is in the laybrinth that Tory finds the mirror that takes her to World War II era England. Putney is incredible at painting the picture in your mind of this wartorn nation and what it was like for them. I could almost imagine myself there as a spectator to their unfolding story.

The romance in this book is such that it develops somewhat in the second half of the book, leaving the first half open for more development of friendship bonds between the mages from the school and the ones from the village. I was very satisfied that while they seemed to click instantly, as they often do nowadays in YA fiction, the development was more of a slower pace that some other novels.

I’m excited to see what happens to everyone in the next book, Dark Passage, coming out hopefully this Fall! And now onto the giveaway.


Dark Mirror Giveaway!
St. Martin’s Griffin has generously allowed me to hold a giveaway for two copies! Here are the rules:

The books will be shipped directly from the publisher. Contest is open until Sunday, March 6, 2011 – 9:00PM Pacific Time.

CONTEST NOW CLOSED! THANKS FOR ENTERING!