This book just sounds absolutely amazing. Jungle with technology that’s greater than what we have today. Futuristic books are always fun to read. I cannot wait to get my hands on this one, I’d probably devour it in one day. 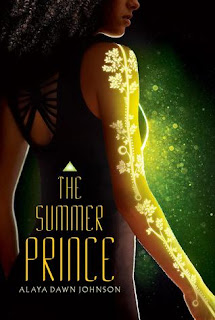 Four hundred years ago, the world ended. And now, on the coast of what was once called Brazil, women rule in the legendary pyramid city of Palmares Três. The city’s Queen only cedes her power to a man once every five years — to a Summer King, whose story will grip the city like a fever.
For June Costa, art is everything. Her brilliant creations — from murals and holograms to a delicate pattern of lights in her skin — have impressed (and irritated) her classmates and teachers alike. Her dream is to win the prestigious Queen’s Award, and the instant fame and success that come with it. It’s a dream she never questions — until she meets Enki. Enki, the newly-elected Summer King, is the hottest thing in Palmares Três. But when June sees Enki, she sees more than piercing amber eyes and a lethal samba: She sees a fellow artist.
Together, June and Enki will create art that Palmares Três will never forget. They will add fuel to a growing rebellion against the government’s strict limits on new tech. And June will fall deeply, tragically in love with Enki.
Because like all Summer Kings before him, Enki is destined to die.

5 Responses to “Waiting on Wednesday {25} The Summer Prince”