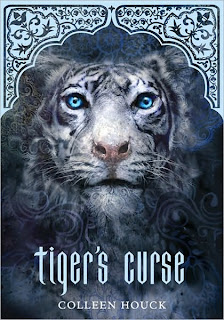 Tiger’s Curse by Colleen Houck
Publisher: Splinter (Imprint of Sterling)
Release Date: January 11, 2011
Source: Bought
Rating: 4/5 – It was really really good
Cover Comments: It is one of my favorite covers of all time. I would stop and just stare at it for a few minutes while I was reading.

Summary from Good Reads:
Passion. Fate. Loyalty. Would you risk it all to change your destiny? The last thing Kelsey Hayes thought she’d be doing this summer was trying to break a 300-year old Indian curse. With a mysterious white tiger named Ren. Halfway around the world. But that’s exactly what happened. Face-to-face with dark forces, spell-binding magic, and mystical worlds where nothing is what it seems, Kelsey risks everything to piece together an ancient prophecy that could break the curse forever. Tiger’s Curse is the exciting first volume in an epic fantasy-romance that will leave you breathless and yearning for more

My thoughts on Tiger’s Curse:
One of the things I loved most about this book was that instead of having a damsel in distress we have Kelsey going all the way to India with someone she doesn’t know and a tiger she loves to help him break his and his brother’s curse. The tables were turned.

Also, I’ve always wanted to read a story about jungles and tigers. Because I love felines. Tiger’s especially. I’d have one if I knew without a doubt it wouldn’t eat me. Anyways, this book made me think about jungles and tigers all day while I was reading it. The descriptions were lovely. I even had a feel for the circus while Kelsey was working there. I loved all the characters. Mr. Kadam is made of generosity. I thought Ren and Kishan would speak in a more old fashioned way, given they were living 300+ years before the story starts. I’m looking forward to seeing more of Kishan in Tiger’s Quest, but I didn’t like how his actions seemed to be repeating history.

The main thing I didn’t like about this book was how the ending came about. I felt it was sudden, out of nowhere. I wouldn’t want the overall ending changed since it’s a great lead-in for the next book, but I would’ve liked to have seen it come about differently. I felt like Kelsey brought what happened on herself by thinking things all of a sudden that just weren’t true.