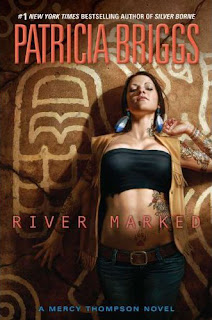 Car mechanic Mercy Thompson has always known there was something different about her, and not just the way she can make a VW engine sit up and beg. Mercy is a shapeshifter, a talent she inherited from her long-gone father. She’s never known any others of her kind. Until now.

An evil is stirring in the depths of the Columbia River-one that her father’s people may know something about. And to have any hope of surviving, Mercy and her mate, the Alpha werewolf Adam, will need their help…

My thoughts on River Marked:
This is my favorite of the Mercy Thompson series. And only because we finally learn more about what Mercy is and where she comes from. And that she is not the only one of her kind. The novel only spans a few days, and many characters that we see throughout the series were almost completely absent, which I didn’t like so much.

The Native American aspect in this book only piqued my interest in doing more research on my own, especially since I do have Native American ties in my family. I was glad to see Coyote, and the others, Raven, Thunderbird, Bear, Wolf. I look forward to seeing more of them in future installments. And I hope this won’t be the last we see of the walking stick, because I’ve grown rather fond of it.

Next up is the next installment of her Alpha and Omega series featuring Anna and Charles! Comes out January 2012, so far away!