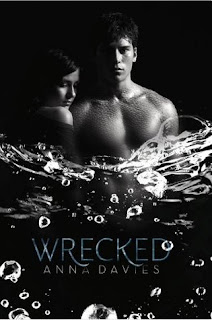 Secrets of the sea have never been sexier than this.


Ever since the death of her parents, Miranda has lived on Whym Island, taking comfort in the local folklore, which claims a mysterious sea witch controls the fate of all on the island and in its surrounding waters. Sometimes it’s just easier to believe things are out of your control.


But then a terrible boating accident takes the lives of several of her friends, and Miranda is rescued by a mysterious boy who haunts her dreams. Consumed by guilt from the accident, she finds refuge in late-night swims—and meets Christian, a boy who seems eerily familiar, but who is full of mystery: He won’t tell her where he is from, or why they can only meet at the beach. But Miranda falls for him anyway…and discovers that Christian’s secrets, though meant to protect her, may bring her nothing but harm.

I really wanted to like this book. I love mermaid stories, and I absolutely adore the cover to this. But Wrecked just didn’t work for me.

Short explanation starts now. The characters didn’t really feel all that fleshed out. I didn’t understand why everyone automatically hated Miranda just because she was driving the boat during the accident. The writing was not great, and things were sometimes repeated or were contradictory. There were choppy sentences sometimes, and then there were just wordy sentences that felt like filler. I also couldn’t understand how Miranda could fall in insta-love with Christian after the crash. The story was just full of little holes that I couldn’t get out of my mind.

Every now and then when I read a debut I’m sometimes flabbergasted by how awesome a book is and surprised it’s the author’s first. That was not the case this time. I could tell this was a debut. If you like mermaid stories give it a try, but I would definitely suggest borrowing this from a friend or the library, instead of buying.