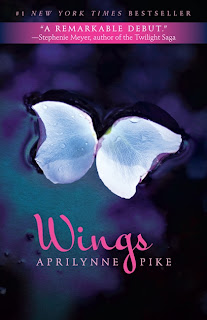 Summary from Goodreads:
Laurel was mesmerized, staring at the pale things with wide eyes. They were terrifyingly beautiful—too beautiful for words.


Laurel turned to the mirror again, her eyes on the hovering petals that floated beside her head. They looked almost like wings.


In this extraordinary tale of magic and intrigue, romance and danger, everything you thought you knew about faeries will be changed forever.

I first read this back in 2010 when it was first released in paperback. It was actually my birthday present. I don’t remember what my original thoughts were after reading it though, so I decided to reread it, partly for the blog, but mostly to refresh my memory for when I read Spells, and eventually Illusion.
I can remember that what drew me to this book was that it was about faeries. I’ve always loved faeries, so I always devour any stories about them that I can find. I love Aprilynne Pike’s take of faeries in Wings. I think having them actually be plants is a fitting idea, since faeries have always gone hand in hand with nature. I love it. I also love the idea of a flower sprouting out of her back instead of wings, although not being able to fly is kind of sad. And having faeries for the different seasons, with different abilities is neat. I’d personally want to be a winter faerie, even though I hate being cold. Winter has always had this magical allure for me.
The writing is about what you might expect for the average YA novel. It’s not bad, but I have seen better. It’s an easy read though, which can be nice when you just want something light and fast to read. One thing I really didn’t like was the love triangle. First of all, Laurel is hard to connect with, which also makes it hard to figure out which guy I’d want her to end up with. First she’s leaning towards David, then she switches to Tamani, and keeps going back and forth, never making a decision. I’m assuming one is made later on in either Spells or Illusion, but nothing is decided definitely here. I have to be honest, it fell like Bella, Edward, and Jacob all over again. And at the end I still don’t know who I am hoping she ends up with, when I’ve usually decided almost immediately after both guys have been introduced.
For the most part, Wings is all right. Not a stellar, mind-blowing read, but a light and fast one that is somewhat entertaining. I’ll definitely be finishing this series since I would like to know who she ends up with, or if she doesn’t.

One Response to “Review: Wings by Aprilynne Pike”