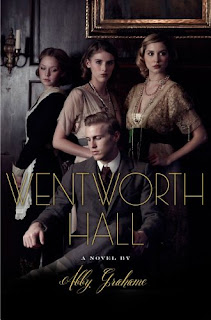 Summary from Goodreads:
The prettiest people often have the ugliest secrets…

Eighteen-year-old Maggie Darlington has turned into an entirely different person. The once spirited teen is now passive and reserved. A change Lord and Lady Darlington can’t help but be grateful for.


It’s 1912, and the Darlingtons of Wentworth Hall have more than just the extensive grounds to maintain. As one of Britain’s most elite families, they need to keep up appearances that things are as they have always been… even as their carefully constructed façade rapidly comes undone.


Maggie has a secret. And she’s not the only one… the handsome groom Michael, the beautiful new French nanny Therese, the Darlingtons’ teenage houseguests Teddy and Jessica, and even Maggie’s younger sister Lila are all hiding something. Passion, betrayal, heartache, and whispered declarations of love take place under the Darlingtons’ massive roof. And one of these secrets has the power to ruin the Darlingtons forever.


When scandalous satires start appearing in the newspaper with details that closely mirror the lives of the Darlingtons, everyone is looking over their shoulder, worrying their scandal will be next. Because at Wentworth Hall, nothing stays secret for long.

I was so incredibly excited for this book. It’s one I had thought about trying to actually request a review copy from the publisher, but decided to wait and just purchase it. I have to be honest though, it didn’t quite meet my expectations. It felt a little bit like a rip off of Downtown Abbey.

There are two sisters, Maggie and Lila. Maggie would be Mary, and Lila would be Edith. Lord and Lady Darlington are trying to marry off Maggie to a rich old guy, or the rich young guy that’s recently come to stay with the Darlingtons. There was no real character growth for any of these characters since we’re dropped into the middle of the story at the beginning. The two rich twins that come to stay didn’t really feel necessary at all, because as soon as Maggie spurns Teddy, it’s like they’re instantly forgotten, and only a small bit is said about them at the end of the book.

The focus is mainly on the romance between Maggie and someone on the staff, and a shocking secret that is revealed. Actually two shocking secrets, because one of the other staff has something revealed that was entirely predictable. I didn’t really like the newspaper satires that were inserted throughout the story, they felt more ridiculous than they should’ve been and just felt like interruptions. The only thing I really enjoyed was the ending, because that did surprise me just a little bit.

Overall, this book suffered from being short. I think it could’ve been fleshed out better plot-wise and character depth-wise if it had been longer than just 276 pages. I know many of us are feeling the void of no airing Downton Abbey right now, and while this definitely will not fill it, it may help temporarily. If you like historical fiction give it a try, but it just wasn’t really my cup of tea.

Born at Midnight by C.C. Hunter
Review: Bittersweet by Sarah Ockler
Review: Breadcrumbs by Anne Ursu
Review: The Girl in the Steel Corset by Kady Cross