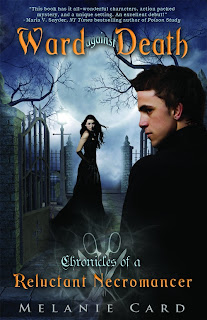 Summary from Goodreads:
Twenty-year-old Ward de Ath expected this to be a simple job bring a nobleman s daughter back from the dead for fifteen minutes, let her family say good-bye, and launch his fledgling career as a necromancer. Goddess knows he can t be a surgeon the Quayestri already branded him a criminal for trying so bringing people back from the dead it is.
But when Ward wakes the beautiful Celia Carlyle, he gets more than he bargained for. Insistent that she s been murdered, Celia begs Ward to keep her alive and help her find justice. By the time she drags him out her bedroom window and into the sewers, Ward can t bring himself to break his damned physician s Oath and desert her.

However, nothing is as it seems including Celia. One second, she s treating Ward like sewage, the next she s kissing him. And for a nobleman s daughter, she sure has a lot of enemies. If he could just convince his heart to give up on the infuriating beauty, he might get out of this alive…

I love the idea behind Ward Against Death. Magic and necromancers, a lost civilization’s secrets influencing the present. Overall I liked it, but it didn’t quite meet my expectations for the genre it’s in.
The plot itself didn’t quite feel right, too convenient at times. The story tried hard to seem convoluted, but didn’t quite achieve it’s goal. There also wasn’t quite as much backstory to either character as I would have liked, or for the world itself. I liked Ward for most of the book, kind of weak and clumsy, but honorable and not an oathbreaker. But suddenly at one point it felt like he had a personality switch to being completely sure of himself, which wasn’t quite believable. And then at a crucial point in the story, when there’s build-up to something that could be completely awesome the confidence suddenfly fizzles, giving the conflict a lackluster ending. I loved Celia. She stayed constant throughout the story. Strong, as honorable as an assassin can be. She had a mind of her own and wouldn’t let anyone say no to her.
The writing was very well done. I could see the world in my mind, the streets and sewers and the underground cave. Everything was described beautifully. I will definitely give the sequel a try, in the hopes that more backstory is provided. I’d love to know more about the Ancients, and especially about how powerful Ward really is.

One Response to “Review: Ward Against Death by Melanie Card”