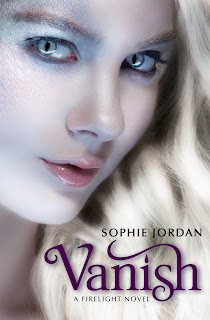 To save the life of the boy she loves, Jacinda did the unthinkable: She betrayed the most closely-guarded secret of her kind. Now she must return to the protection of her pride knowing she might never see Will again—and worse, that because his mind has been shaded, Will’s memories of that fateful night and why she had to flee are gone.

Back home, Jacinda is greeted with hostility and must work to prove her loyalty for both her sake and her family’s. Among the few who will even talk to her are Cassian, the pride’s heir apparent who has always wanted her, and her sister, Tamra, who has been forever changed by a twist of fate. Jacinda knows that she should forget Will and move on—that if he managed to remember and keep his promise to find her, it would only endanger them both. Yet she clings to the hope that someday they will be together again. When the chance arrives to follow her heart, will she risk everything for love?

There are some bombs dropped in Vanish, making this even more thrilling than Firelight. Story-wise this was very good, with Tamra finally manifesting and finding her inner draki. Though I did think it was a little too convenient that she happened to be one of the most rare draki that was especially needed in their pride since Nidia won’t be around forever to fulfill her duty.

Cassian rocked in Vanish as well, which makes me only wish even more that Jacinda would choose him. Will proved to me that I don’t want Jacinda ending up with him based off some of his actions. I applauded her ability to choose one of the boys in Firelight, but in Vanish we’re served that indecision crap I was so happy to not have to deal with. Oh well. I was happy though that the setting for Vanish to place back among the pride. I felt like we didn’t get see enough of the people that Jacinda and Tamra left behind in Firelight. Provided a different atmosphere for the story, which I much preferred. Felt more like a fantasy book than a run of the mill paranormal book set in a cityscape.

While some questions were answered, we have even more that were introduced and not answered. Like what really happened to their father? And seriously, who are the Enkros? What do they want with the draki? Well we’ll definitely find out since Jacinda was stupid enough to pull something selfish and get somebody else caught by the Enkros. Book three, Hidden, is I assume going to be focused on the rescue mission that is hatched at the end of Vanish. I’m definitely looking forward to finally finding out everything.