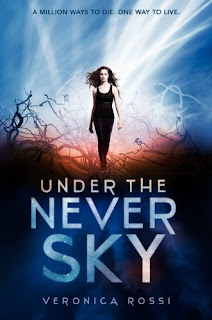 Summary from Goodreads:
Aria is a teenager in the enclosed city of Reverie. Like all Dwellers, she spends her time with friends in virtual environments, called Realms, accessed through an eyepiece called a Smarteye. Aria enjoys the Realms and the easy life in Reverie. When she is forced out of the pod for a crime she did not commit, she believes her death is imminent. The outside world is known as The Death Shop, with danger in every direction.

As an Outsider, Perry has always known hunger, vicious predators, and violent energy storms from the swirling electrified atmosphere called the Aether. A bit of an outcast even among his hunting tribe, Perry withstands these daily tests with his exceptional abilities, as he is gifted with powerful senses that enable him to scent danger, food and even human emotions.

They come together reluctantly, for Aria must depend on Perry, whom she considers a barbarian, to help her get back to Reverie, while Perry needs Aria to help unravel the mystery of his beloved nephew’s abduction by the Dwellers. Together they embark on a journey challenged as much by their prejudices as by encounters with cannibals and wolves. But to their surprise, Aria and Perry forge an unlikely love – one that will forever change the fate of all who live UNDER THE NEVER SKY.

I loved Under the Never Sky. Starts out with light science fiction and then shifts to fantasy for the bulk of the story. Fantasy is my favorite genre. Then the end shifts back to science fiction, and all transitions are smooth and make complete sense the way they’re done. Nicely blended, so that even if you aren’t really a sci-fi fan, you’d probably still enjoy this for the most part. The pacing was excellent, nothing felt rushed to bogged down. Backstory for everyone in need of one was revealed at times that made sense and helped you understand some of the actions these characters were taking.
Aria is an awesome lead. She gets thrown out of her home, and yes just sits there for a while in disbelief, but then she gets up and starts moving. And she survives and becomes even stronger than she was before. I admire characters like that. Perry, or Peregrine, got on my nerves a lot at first. He kept blaming Aria for something that was out of her control and wasn’t her fault at all, it was actually Perry’s own fault since he made the decision to act on something that had consequences. Although in the end, it really wasn’t the fault of either because of a plot twist that threw me for a loop. Perry grew on me in the end, though honestly I don’t think he compared to Roar. I would have loved this book even more (if that’s possible) if Roar had been the main male lead opposite Aria. Dangerous, lethal, and sexy, this is one swoon-worthy guy. I craved any scenes with him.
Some of the ideas behind this book are incredibly creepy. Take the Realms for example. Virtual reality that no one ever leaves, kind of similar to the world in the movie The Surrogates. While being able to do anything you could possilby think of (FLYING!) sounds awesome, it’s also scary because these people are letting this control their lives, making them weaker overall so that they think they can’t survive outside their pods. That’s also prophetic because we’re well on our way to that kind of society with so many people already spending so much of their time attached to technology, whether it’s phones, computers, or videogames. I can definitely see us and our technology evolving in such a way that Under the Never Sky’s world could become ours. Which would be all right with me if I met Roar, but otherwise is creepy to think about.
Under the Never Sky packs a punch from the getgo and doesn’t let up with the action, romance, plot twists until the very end. It makes you think even while you’re just enjoying a fun story. If you’re into fantasy, this is definitely a book for you. I’ll be snatching up a finished copy as soon as they hit shelves.

9 Responses to “Review: Under the Never Sky by Veronica Rossi”