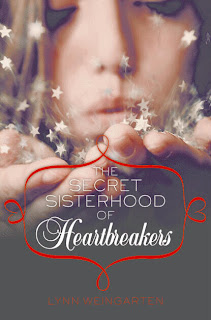 Summary from Goodreads:
When her boyfriend breaks up with her on the first day of sophomore year, Lucy has no idea how she’s going to make it through homeroom, let alone the rest of her life. Enter three stunning girls with a magical offer Lucy can’t refuse. All she has to do is get a guy to fall in love with her in the next seven days, and then…break his heart and collect one of his brokenhearted tears. As the girls teach Lucy how to hook a guy (with the help of a little magic), she quickly discovers how far she is willing to go—and who she is willing to cross—to get what she wants.

Fans of Lauren Myracle, Jodi Lynn Anderson, and Meg Cabot will love this tale of breakups, friendship, new crushes, and magic. Told with wit and charm, The Secret Sisterhood of Heartbreakers is sure to be one of this winter’s most irresistible reads!

This was a fun novel to read. I’ve been wanting a book with some kind of secret sisterhood where the main protagonist actually decides to join and stay for the magic, instead of only staying so they can bring the organization down.
Of all the characters, I would have to say Gil is my favorite. She is such a sweet girl, it’s hard to believe she’s in a sisterhood for heartbreaking. Liza was fun to read about as well, for me she’s probably one of those characters you love to hate, though I didn’t actually hate her. And Olivia I had mixed feelings on, she kind of ran hot and cold. Lucy was an interesting protagonist. I didn’t agree with why she intially wanted to join the heartbreakers, but I understood it. Who hasn’t at some time been crazy over a boy?
The writing was well done. The pacing for the most part was good, though there were maybe two areas that dragged a little because of the lengthy explanations being made by a character. And while I like the ending, I was a little sad at how it came about. I would’ve been happy even if it had gone another way, the way I actually thought it would end before I found out how it really did end.
This is a 2012 debut you do not want to miss. Full of magic, heartbreak, and friendship, this is one book that will be hard to put down.

6 Responses to “Review: The Secret Sisterhood of Heartbreakers by Lynn Weingarten”