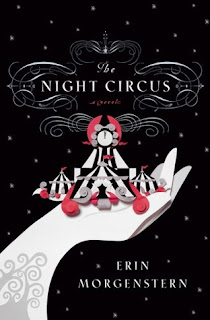 Summary from Goodreads:
The circus arrives without warning. No announcements precede it. It is simply there, when yesterday it was not. Within the black-and-white striped canvas tents is an utterly unique experience full of breathtaking amazements. It is called Le Cirque des Rêves, and it is only open at night.

But behind the scenes, a fierce competition is underway—a duel between two young magicians, Celia and Marco, who have been trained since childhood expressly for this purpose by their mercurial instructors. Unbeknownst to them, this is a game in which only one can be left standing, and the circus is but the stage for a remarkable battle of imagination and will. Despite themselves, however, Celia and Marco tumble headfirst into love—a deep, magical love that makes the lights flicker and the room grow warm whenever they so much as brush hands.

True love or not, the game must play out, and the fates of everyone involved, from the cast of extraordinary circus per­formers to the patrons, hang in the balance, suspended as precariously as the daring acrobats overhead.

Written in rich, seductive prose, this spell-casting novel is a feast for the senses and the heart.

I had seen this around on the blogosphere all of a sudden, read the summary and was immediately hooked. I had to have this book. So on the release day I went straight to my bookstore (The one that fails half the time with new releases I want and not having them), and OH MY GOD THEY HAD IT. I had to make sure I didn’t jump up and down squealing and looking like a crazy person. So I brought it home and just held it and stared at it. The Night Circus is a gorgeous book. Inside and out.

On to the review itself. This book was perfect. Enough said, end review. Haha, no not really. But honestly I love this book. I love the pacing, I love the atmosphere, I love the characters. The only thing I didn’t love was that there wasn’t quite as much romance between Marco and Celia in person. Most of it was them doing feats of magic for each other from long distance. Usually that would enchant me just as much as actual face time between characters, but this time it didn’t.

Pacing and atmosphere. I will say for those who aren’t very patient, the pacing for this is slow, even though it takes place over the course of nearly three decades. But the slow pace didn’t keep me from wanting to read this, it actually made me want to tear through it so I could know what happens next. Instead I forced myself to read it for four or five days so I could savor it. I don’t really know what to say about the atmosphere, I find it hard to explain. It’s obviously magical, and enchanting. I feel like this book is to me what the circus was to the rêveurs. Rêveurs by the way are circus goers who follow the circus in any way that they can. To get a hint of what the atmosphere is like I would suggest watching the book trailer for this, which I have posted a day or so ago.

There are so many characters in this story, but none get thrown to the curb. All the supporting cast have a rhyme and reason for why they are present, and they are each vital to the movement of the story. And they all feel like they are their own person, with no overlapping. My favorite secondary characters were Mr. Barris, the Burgess twins, and especially Friedrick Thiessen, the clockmaker.

I honestly don’t know what else to say to convey my absolute love of this book to you guys. It’s become my favorite read of 2011, but also my favorite read of all time. I’m lending this out to a few friends over the next few weeks, but as soon as I get it back I am rereading this. I recommend this to anyone who loves to read. I’m looking forward to the screen adaptation, though I’m nervous about the film doing justice to the book. We shall see! Go get yourself a copy of this ASAP, and hopefully you guys will enjoy it as much as I did!

“The circus arrives without warning”

8 Responses to “Review: The Night Circus by Erin Morgenstern”