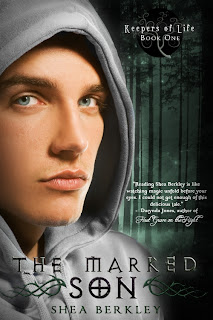 Summary from Goodreads:
Seventeen-year-old Dylan Kennedy always knew something was different about him, but until his mother abandoned him in the middle of Oregon with grandparents he’s never met, he had no idea what.
When Dylan sees a girl in white in the woods behind his grandparents’ farm, he knows he’s seen her before…in his dreams. He’s felt her fear. Heard her insistence that only he can save her world from an evil lord who uses magic and fear to feed his greed for power.

Unable to shake the unearthly pull to Kera, Dylan takes her hand. Either he’s completely insane or he’s about to have the adventure of his life, because where they’re going is full of creatures he’s only read about in horror stories. Worse, the human blood in his veins has Dylan marked for death…

I really enjoyed The Marked Son, and when I started it I didn’t think I would. The Marked Son is told from the perspective of a male protagonist, which I hardly ever read, so I knew that would be kind of interesting. The beginning though was kind of slow for me, and didn’t pick up until Kera and her world finally start interfering with Dylan’s life. Then I was eating up all the fantasy elements, loving it. I was not, however, thrilled with how intensely Kera and Dylan needed each other. They let it rule them, and there were definite consequences to ignoring what was happening and who was getting hurt just because they absolutely had to be together or the world would end (not really though).
The action was very well written, I could picture every move in my mind, and I love being able to do that with action scenes. There was one part especially near the end though, when something happened. I kept wondering how this could possibly go on for another two books since it seemed unlikely given what had happened. There was a solution though that made sense.
I would definitely recommend The Marked son to fans of fantasy, it’s a fun read that is action packed and leaves you on the edge of your seat.

2 Responses to “Review: The Marked Son by Shea Berkley”