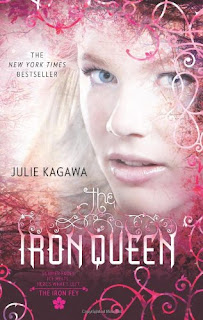 Summary from Goodreads:
My name is Meghan Chase.

I thought it was over. That my time with the fey, the impossible choices I had to make, the sacrifices of those I loved, was behind me. But a storm is approaching, an army of Iron fey that will drag me back, kicking and screaming. Drag me away from the banished prince who’s sworn to stand by my side. Drag me into the core of conflict so powerful, I’m not sure anyone can survive it.

This time, there will be no turning back.

I thought about going back and rereading King and Daughter to review on the blog as well, but decided against it. Mostly because I thought The Iron King was just okay, and The Iron Daughter almost made me give up on the series. The second book saw Meghan just whining nonstop about this and that, and actually took me many months to finish because at one point I just stopped. So when The Iron Queen came out, I waited to see what reviews were saying, and a lot of people were saying this one was the best one yet. And I agree.
Meghan felt so different from what I remember of her in The Iron Daughter. She’s grown up so much, accepts responsibility and commitment with grace. Even does a few things I used to not think her capable of. She really surprised me, and that’s one of the things I loved about The Iron Queen. Ash was as awesome as ever, but it did feel a bit weird to see him acting all lovey-dovey after the previous novels. It grew on me though, since I’ve been Team Ash from the very beginning.
I loved the story itself too. The first half dragged just a bit, but once things got rolling with the Iron Kingdom again, it was one thing after the next, constant moving. And I love how it worked out, even with Ash. At the time of writing this, I’ve already started The Iron Knight and I’m loving how the story is unfolding from where Queen left off.
The only problem I had with The Iron Queen is one I’ve had with all the books. And that is Puck saying “princess” every single time he says anything to Meghan. Or “ice-boy” or “prince” whenever he says something to Ash. If it was every once in a while, like 2 or 3 times out of 10 it wouldn’t bug me at all. But it is every single time. I’ve honestly taken to just ignoring the word when I read Puck’s dialogue.
Overall I’m glad I stuck with this series, because even with Puck annoying me most of the time, this book has really jumpstarted The Iron Fey for me. I can’t wait to delve further into Ash’s story in The Iron Knight.

One Response to “Review: The Iron Queen by Julie Kagawa”