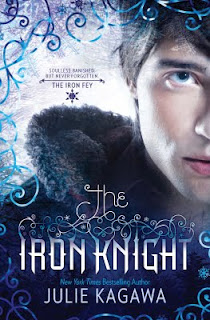 Summary from Goodreads:
My name- my True Name- is Ashallyn’darkmyr Tallyn. I am the last remaining son of Mab, Queen of the Unseelie Court.

And I am dead to her.

My fall began, as many stories do, with a girl…

To cold faery prince Ash, love was a weakness for mortals and fools. His own love had died a horrible death, killing gentler feelings the Winter Prince might have had. Or so he thought.

Then Meghan Chase- a half-human, half-fey slip of a girl- smashed through his barricades, binding him to her irrevocably with his oath to be her knight. And when all of Faery nearly fell to the Iron fey, she severed their bond to save his life. Meghan is now the Iron Queen, ruler of a realm where no Winter or Summer faery can survive,

With the unwelcome company of his archrival, Summer Court prankster Puck, and the infuriating cait sith Grimalkin, Ash begins a journey he is bound to see through its end- a quest to find a way to honor his vow to stand by Meghan’s side.

To survive the Iron Realm, Ash must have a soul and a mortal body. But the tests he must face to earn these things are impossible. And along the way, Ash learns something that changes everything. A truth that challenges his darkest beliefs and shows him that, sometimes, it takes more than courage to make the ultimate sacrifice.

It’s not very often when an author will devote an entire book to a character we all love so much but isn’t the main character of the books that came before. So I was definitely looking forward to The Iron Knight, because I’ve been Team Ash from the beginning. And while all of the books are fantasy, this last one felt more in the fantasy genre than the others, which pleased me very much.
First off, it was very nice finally getting to know more about Ariella. I’d always been curious about her, since she was the first to get Ash to feel love. It was kind of nice seeing things they did together. The only thing I didn’t like about The Iron Knight though was that Ariella provided an out for Ash, giving him another option, one that had him wavering a few times from his quest to be reunited with Megan. I really didn’t like to see him wavering, not after vows and promises he’d made without hesitation in The Iron Queen.
Puck grew on me a little in this book, especially seeing the past between him and Ash even better. Grimalkan seemed a little less like himself at times, almost nice when usually he’d be gruff and calling everyone stupid. I have to say the small change was nice. And we meet the Wolf, of Big Bad Wolf fame. I like that he grew enough throughout the story to stop throwing death threats around at everyone, since they get a bit tiring after the first three or four.
Since this is the last in this series, I really enjoyed a certain chapter that showed a possible future during his trials for him and Meghan. Well, most of the chapter. The end was a bit sad but the beginning and middle were fun. I would hope that a variation of that future would come for them, they deserve happiness.
All in all, the first two books in this series didn’t impress me, and I almost gave up on it. I’m glad I stuck through though because these last two books are definitely my favorite. Anyone on Team Ash would love this, and I think even some Team Puck people might, just because Puck is so present and we get more backstory on both characters. Definitely recommended for fantasy fans.

Review: The Iron Queen by Julie Kagawa
Review: Shadowspell by Jenna Black
Review: Anna and the French Kiss by Stephanie Perkins
The World of Downton Abbey by Jessica Fellowes

3 Responses to “Review: The Iron Knight by Julie Kagawa”