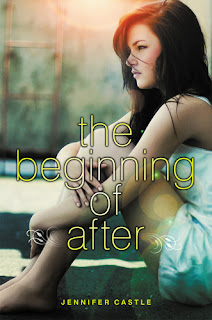 Summary from Goodreads:
Anyone who’s had something truly crappy happen to them will tell you: It’s all about Before and After. What I’m talking about here is the ka-pow, shake-you-to-your-core-and-turn-your-bones-to-plastic kind of crappy.

Sixteen-year-old Laurel’s world changes instantly when her parents and brother are killed in a terrible car accident. Behind the wheel is the father of her bad-boy neighbor, David Kaufman, whose mother is also killed. In the aftermath of the tragedy, Laurel navigates a new reality in which she and her best friend grow apart, boys may or may not be approaching her out of pity, overpowering memories lurk everywhere, and Mr. Kaufman is comatose but still very much alive. Through it all there is David, who swoops in and out of Laurel’s life and to whom she finds herself attracted against her better judgment. She will forever be connected to him by their mutual loss—a connection that will change them both in unexpected ways.

Jennifer Castle’s debut novel is a heart-wrenching, surprisingly witty testament to how drastically life can change in the span of a single moment.

This book was an interesting experience, gut-wrenching and heartbreaking, and yet I felt detached at the same time.
I have an intense fear of death; my own, and that of anyone in my family. My grandparent’s death’s I can barely remember since they happened when I was younger. I can’t imagine a world without my mom and brother though, so then I really can’t even begin to imagine what both Laurel and her grandmother, and David are going through after the loss of the people closest to them
Throughout the entire story I was both frustrated, and yet understanding at the same time, of Laurel’s behavior. Intellectually I think of it as her being alive, and having to continue living despite her horrible loss, and that’s what she’s doing. That’s why the title is The Beginning of After. But emotionally, I couldn’t really connect to her because she seemed at times somewhat detached from the situation. Just like any normal girl, nothing happened and shopping for dresses. It’s hard to reconcile both what I’m getting from the intellectual aspect and the emotional. Both are right, and in a way both are wrong.
There is no real right or wrong to grief though. Every single person handles grief differently.We see this in both Laurel’s grandmother, as well as her neighbor and childhood friend David. Her grandmother just bottles it all up to be strong for Laurel and David, and we rarely get a glimpse at what it’s like for her, which was a little disappointing for me. David went off on a road trip to lose himself and find himself.
The day of writing this review I spent the entire time thinking about death, and how people deal with it. Death is actually on my mind far more often than I’d like it to be. The book was a little hard for me to read in the very beginning since we were given a glimpse of the families before the tragedy. But afterwards, like I said, there was occasional detachment. I couldn’t stay connected to the characters.

If this was meant to be one of those books that you need to have a box of tissues nearby while you’re reading, that did not happen for me. It was not a tearjerker. If you like YA contemporary you might give this a try, but in my personal opinion, you’re not missing a whole lot if you skip it.

5 Responses to “Review: The Beginning of After by Jennifer Castle”