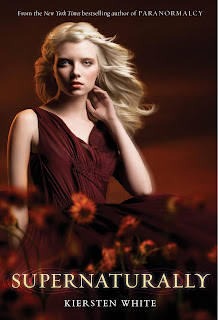 Summary from Goodreads:
Evie finally has the normal life she’s always longed for. But she’s shocked to discover that being ordinary can be . . . kind of boring. Just when Evie starts to long for her days at the International Paranormal Containment Agency, she’s given a chance to work for them again. Desperate for a break from all the normalcy, she agrees.

But as one disastrous mission leads to another, Evie starts to wonder if she made the right choice. And when Evie’s faerie ex-boyfriend Reth appears with devastating revelations about her past, she discovers that there’s a battle brewing between the faerie courts that could throw the whole supernatural world into chaos. The prize in question? Evie herself.
So much for normal.

Supernaturally was a pretty good second entry in this series, but I have to say I enjoyed Paranormalcy just a tad bit more. Evie was filled with way more self-doubt about herself and her relationship with Lend than I ever could have thought possible, given what a kick-ass protagonist she was in Paranormalcy. I also wasn’t too happy with Lend, because of the way he reacted, or overreacted near the end. I felt for Evie when she had to deal with consequences of her actions, or rather inaction in one spot, but then again it was like you brought it on yourself Evie. That’s why you don’t keep secrets from the people you care about.
I wasn’t all that fond of Jack. He was just too cocky and always getting in between Lend and Evie. After Paranormalcy I don’t think I liked Reth any, since he really did seem kind of psychotic and everything. But now that that’s all done with in Supernaturally, we actually get to see more of who Reth is underneath that all-consuming desire from the first book. I have to say my opinion of him definitely changed, and I’ll be interested to see how his story will play out in the last book.
Overall though I did enjoy Supernaturally, even if it did produce moments where I wanted to rip my hair out. The writing is still as good as ever, and the pacing spot on. I’m definitely looking forward to the last book, because I’m dying to know what becomes of Lend and Evie.