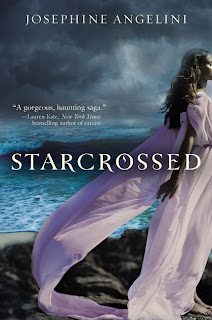 Summary from Goodreads:
How do you defy destiny?

Helen Hamilton has spent her entire sixteen years trying to hide how different she is—no easy task on an island as small and sheltered as Nantucket. And it’s getting harder. Nightmares of a desperate desert journey have Helen waking parched, only to find her sheets damaged by dirt and dust. At school she’s haunted by hallucinations of three women weeping tears of blood . . . and when Helen first crosses paths with Lucas Delos, she has no way of knowing they’re destined to play the leading roles in a tragedy the Fates insist on repeating throughout history.

As Helen unlocks the secrets of her ancestry, she realizes that some myths are more than just legend. But even demigod powers might not be enough to defy the forces that are both drawing her and Lucas together—and trying to tear them apart.

I was in the bookstore one evening when I snatched up about four books I’d eagerly been waiting for, and this was one of them. I was out shopping with my mom, so while she was still browsing I sat down to wait with one of the books, and chose Starcrossed. I’m not entirely sure why, but the first chapter was just a tad slow for me, but the story quickly picks up in the following chapters.
One thing I absolutely loved about Starcrossed was that though there was insta-attraction, it was quickly followed by hate for a while instead of just being intense love at first sight. Josephine built up the relationship throughout the story. And I loved the way she integrated Greek mythology into the story. Not a direct retelling, but using it in such a way that each generation has a person that is someone from the Illiad reborn. I definitely can’t wait to see how that plays out in the two sequels.
Supporting characts are awesome in this series, if a bit reminiscent of the Twilight family dynamic. I have to say though that as much as I love the Cullens, I loved Lucas’ family even more. Ariadne, Cassandra, Hector and Jason all felt like their own characters, no melding together and seeming the same. I think at one point I even almost wished Jason was the male protagonist instead of Lucas, though overall Lucas is the most swoon-worthy of the brothers. And the writing overall was very good. I was able to be engrossed in the story, and actually drew this out for nearly a week because I didn’t want it to end.
Starcrossed is a lovely debut by Josepehine Angelini that has a little bit of everything, mythology and romance, action and mystery. If you’re a fan of Greek mythology don’t pass up this unique twist on Helen of Troy! The sequel, Dreamless, will be out in 2012!