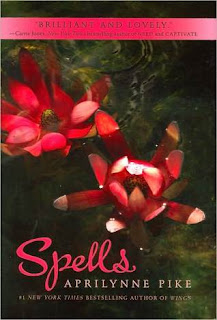 Summary from Goodreads:
Six months have passed since Laurel saved the gateway to the faerie realm of Avalon. Now she must spend her summer there, honing her skills as a Fall faerie. But her human family and friends are still in mortal danger–and the gateway to Avalon is more compromised than ever.


When it comes time to protect those she loves, will she depend on David, her human boyfriend, for help? Or will she turn to Tamani, the electrifying faerie with whom her connection is undeniable?

This was without a doubt so much better than Wings. That’s not to say I didn’t like Wings, because I did. It was an all right book. But seriously, Spells was so much better. My favorite thing was the world-building for Avalon. It was done in such a way that it didn’t feel like an info dump, though I did think that Laurel’s time spent at the Academy was rushed just the tiniest bit. But I loved how descriptive the author was when describing the faerie world. I felt like I was there, that’s how well I could see it in my mind. The writing definitely improved from book one to two.

We see more of one boy than the other in this book though, and I can’t quite decide which one I’m rooting for. David and Tamani are both great guys, and it’d be awesome if they could just be combined into one person. But that isn’t possible, so hopefully Illusions will help me make up my mind on that score.

There was a plot turn that I was not expecting, with a new person introduced that changes things up. I’m definitely interested in seeing where that goes, but it did sort of make what happens in the ending problem a tad predictable. I’m definitely eager though to jump right into the next book to see what happens to everyone next. I definitely need more of Avalon!

Recommended for anyone who loves faeries. And fantasy and romance. Just beware the love triangle and a girl who can’t make up her mind half the time.