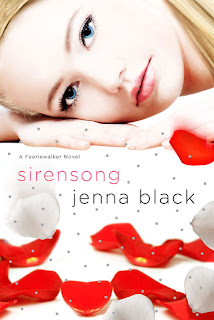 Summary from Goodreads:
When Dana is invited to Faerie to be officially presented at the Seelie Court, it’s no easy decision. After all, everyone knows Titania, the Seelie Queen, wants her dead. But Titania claims not to be the one behind the death threats; and her son, Prince Henry, makes the decision a whole lot easier when he suggests Dana might be arrested for (supposedly) conspiring with her aunt Grace to usurp the Seelie throne. So she and her father better do as they’re told…

The journey through Faerie is long – and treacherous. Dana thought it would be a good idea to have friends along, but her sort-of-boyfriend Ethan and her bodyguard’s son, Keane, just can’t seem to get along, and Kimber’s crush on Keane isn’t making things any easier. When a violent attack separates Dana from their caravan, the sexy Erlking saves her just in the nick of time… and makes it clear that he hasn’t given up on making her his own.

Arriving at Titania’s beautiful palace should be a relief. But Dana is soon implicated in an assassination attempt against Titania’s niece, and is suddenly a fugitive, forced to leave her father behind as she and her friends flee for her lives. Will she be able to prove her innocence before the forces of the Seelie Court catch up with her? Or, worse, the Erlking? And will she save her father before he pays the ultimate price in her stead?

Warning: There might possibly be spoilers in this, so please keep that in mind if you have yet to read the first two books in this series!

This by far is my favorite of the Faeriewalker series. Glimmerglass was pretty good, but Shadowspell was much better. And now we have Sirensong, which is the best. Jenna Black just keeps the awesome coming.

We’ve seen everyone develop and grow throughout the series, except for the mother. She’s still as in denial as she ever was, which pisses me off. That was the only thing I didn’t like about Sirensong, the mother. Thankfully we see very little of her throughout the entire story. Just at the beginning and end. Her dad, Seamus has really grown as well, even if it might not seem like it. He’s more tolerant of Dana’s ways, seems to understand her better now that he’s gotten to know her more. The experiences that Ethan went through in Shadowspell benefitted him overall I think, even though they kind of sucked at the time. He’s not the playboy he was once, even when he first met Dana. I really believe now that he can commit himself to Dana, and this book only cemented that in my mind. Kimber and Keane of course were present as well. I really liked the direction Jenna takes them in this book, and would love to see more development of that. I think Kimber was a little quick to forgive though when certain things came to light.

I absolutely loved that Sirensong was mostly set in Faerie. Getting to finally meet that world and its denizens was fun, and written so well that I could picture myself actually there. And finally meeting Titania! Now we just need to meet Mab. As they were setting out for Faerie in the beginning, Seamus gives something to Dana to take with her, and because of what it was I thought a certain plot point might end up being predictible, but boy was I wrong. There are definitely some twists and turns that will end up surprising you.

I’m very much hoping that this was not the last installment, as there are many subplots left for Jenna to write about in another sequel. If there is another one in the works, I’m definitely looking forward to reading it.

One Response to “Review: Sirensong by Jenna Black”