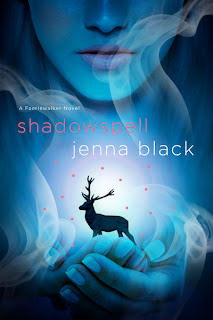 Summary from Goodreads:
On top of spending most of her time in a bunkerlike safe house and having her dates hijacked by a formidable Fae bodyguard, Faeriewalker Dana Hathaway is in for some more bad news: the Erlking and his pack of murderous minions known as the Wild Hunt have descended upon Avalon. With his homicidal appetite and immortal powers, the Erlking has long been the nightmare of the Fae realm. A fragile treaty with the Faerie Queen, sealed with a mysterious spell, is the one thing that keeps him from hunting unchecked in Avalon, the only place on Earth where humans and Fae live together. Which means Dana’s in trouble, since it’s common knowledge that the Faerie Queen wants her – and her rare Faeriewalker powers – dead. The smoldering, sexy Erlking’s got his sights set on Dana, but does he only seek to kill her, or does he have something much darker in mind?

It took me a while to get around to reading this. I liked Glimmerglass a lot, but it was also just a three star read. Enjoyable, but not one of my favorites. But when this one was released I felt the need to buy it immediately. And six months later I’ve finally read it. And I’m glad I did. I liked Shadowspell much more than Glimmerglass. And the two questions I had left over from Glimmerglass dealing with Dana’s singing and prospective love interests were answered. Although, the love interest thing took a twist in Shadowspell that I was not expecting at all.

Shadowspell starts out with a bang as the Erlking makes his entrance into Avalon. I have seen many authors try to write the sexy villain. Many succeed, but many also fail. At least for me. What doesn’t work for me will always work for someone. But Jenna Black nailed the Erlking as the sexy villain. And he’s smart too. The way he manipulates people, making someone think an idea is their own to get what he wants. That’s also sometimes hard to write well, but again she nails it. I definitely look forward to more of the Erlking in Sirensong.

While the Erlking is the main attraction for Shadowspell, Grace does of course return to continue advancing her schemes. There’s definitely no lack of action. Ethan is as sleazy as ever. I did feel bad for him during is ordeal, but I still don’t want Dana ending up with him. But we’ll see. Maybe he’ll be redeemed later on. And her mother. Wow. There’s nothing really nice I can say about her. Except that she makes me grateful for the mother I have.

As I started this review, I looked back at the one I did of Glimmerglass. It was very nostalgic, since Glimmerglass was the first ever review I posted on this blog back in December. And now Sirensong will be out soon! I’m definitely looking forward to reading the next installment. I need more of the Erlking.

Have you read Shadowspell yet? What did you think? Let me know!

Angelfire by Courtney Allison Moulton
Review: Lola and the Boy Next Door by Stephanie Perkins
Review: The Marked Son by Shea Berkley
Review: The Girl in the Steel Corset by Kady Cross