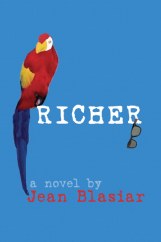 Summary from Good Reads:
How many teens have their poetry adapted to music by today’s rock star? Every teen’s dream, but actually a nightmare for Rich Cameron. Despite his mother’s divorce, another broken home, his friend’s ruined Olympic dreams and his own major health complication, it’s a very interesting year for U2’s favorite genius. Just as his life started to make sense again, Rich receives a letter from his former au pair, leading to revelations that set the tone for an unforgettable year. The mysteries, pains and ecstasy of love will force Rich and his family to redefine what is ‘normal’ all over again, in this funny, touching, and thrilling new chapter in the life of Rich Cameron and his constant companion, U2.

My thoughts on Richer:
This novel was hard for me to get into at first. I hadn’t read the first one, Poor Rich. One of the characters being talked about, Gia, seemed to be a major character in the first, but is never a real presence in this one. Instead we’re given Amy, who seems to be a possible love interest for Rich, but later is relegated to a different position in the cast of characters. The point where this really picked up for me is when I saw more of Brian, Rich’s dad’s partner. He showed a real desire to see Rich happy, really seemed to care about him. He was my favorite character, along with Rich’s bird U2. That bird picked up the funniest sayings.

The writing style is not quite what I’m used to, so it took me a couple days to get into it, but once that happened I eagerly read through the second half. This book chronicles another interesting and crazy year in the life of Rich, who goes from not quite fitting in, to growing into his skin, becoming more comfortable with who he is. I would definitely recommend giving this a try, but make sure to read Poor Rich first.

One Response to “Review: Richer by Jean Blasiar”