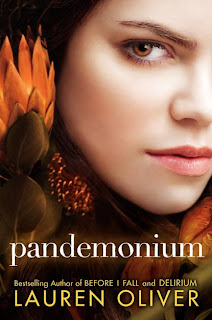 Summary from Goodreads:
Lauren Oliver captivated readers with Delirium, the first book in a thrilling dystopian trilogy in which Lena Haloway dared to fall in love with Alex and escape the cure, the government-mandated procedure that renders a person immune to the disease of love. Lena and Alex staked their lives on leaving their oppressive society, but only Lena broke free.

Pandemonium continues Lena’s gripping story. After escaping from Portland, Maine, Lena makes it to the Wilds and becomes part of an Invalid community, where she transforms herself into a warrior for the resistance. A future without Alex is unimaginable, but Lena pushes forward and fights, both for him and for a world in which love is no longer considered a disease. Swept up in a volatile mix of revolutionaries and counterinsurgents, Lena struggles to survive—and wonders if she may be falling in love again.

Full of danger, forbidden romance, and exquisite writing, Lauren Oliver’s sequel to Delirium races forward at a breathtaking pace and is sure to appeal to fans who crave the high-stakes action of The Hunger Games and the bittersweet love story of Romeo & Juliet.

For the most part I was just a tiny bit mixed on Delirium. The beginning did not work for me, but I stuck through it and finished an explosive second half that made up for the first half. So when I started this I had hopes that the problem wouldn’t be repeated. It was, just slightly different.
The pacing started out very good, and I was really liking how there were two timelines, one in the now, and the one that was then, detailing what happens to Lena after she escapes alone to the Wilds. The “then” segments are what got me, right around a third of the way through. Lena was stuck in a situation, and it got dragged out over those chapters for another third of the book, and just slowed the pacing down. The last third picked up again, and also threw a few curveballs Lena’s way, ones that I didn’t see coming, except for one.
On Alex and the summary’s hint of falling in love again, I won’t say anything. I can’t really without spoiling anything for you guys, and I definitely don’t want to spoil this for anyone. So you’ll just have to wait until you get your hands on a copy. The “Invalids” she meeds up with in the Wilds though I can talk about. The leader was Raven, as well as Tack, and others included a little girl named Blue, and someone named Hunter, though his name is not indicative of talent in hunting. They were all pretty close, and took care of each other, and welcomed Lena into their community. I liked reading about them.
Overall I did enjoy this, slightly more than I did Delirium. The pacing as I said still got to me, but I still enjoyed the story itself, and the action and tension present here and there throughout the book. If you loved Delirium, make sure you don’t miss this sequel.