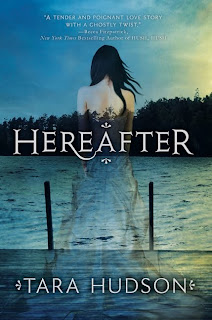 Summary from Goodreads:
Can there truly be love after death?

Drifting in the dark waters of a mysterious river, the only thing Amelia knows for sure is that she’s dead. With no recollection of her past life—or her actual death—she’s trapped alone in a nightmarish existence. All of this changes when she tries to rescue a boy, Joshua, from drowning in her river. As a ghost, she can do nothing but will him to live. Yet in an unforgettable moment of connection, she helps him survive.

Amelia and Joshua grow ever closer as they begin to uncover the strange circumstances of her death and the secrets of the dark river that held her captive for so long. But even while they struggle to keep their bond hidden from the living world, a frightening spirit named Eli is doing everything in his power to destroy their newfound happiness and drag Amelia back into the ghost world . . . forever.

Thrilling and evocative, with moments of pure pleasure, Hereafter is a sensation you won’t want to miss.

I used to not really be a fan of ghost stories, just because obviously to be a ghost you have to have died, and I seriously am afraid of the concept of death. Then I read The Ghost and the Goth, which kind of turned me on to ghost stories. So I decided to try Hereafter, because it was a title anticipated by many, and many of the early reviews I read liked it. Another thing that drew me to this initially was that it was paranormal without the vampires. I’m sorry, but vampires are so over done.
Hereafter starts off with a bang, with Amelia meeting Joshua at a critical moment. I loved the way the relationship between them develops. Slowly and with wonder, almost like discovering the fact that you can feel something for someone else. Not really insta-love, but insta-connection which develops nicely into love. And the writing is beautiful. I love when I come across writing as good as Tara Hudson’s, because then I feel as though I’m a participant in the story, and not just an observer. It made me want to rip through the book, but also savor it at the same time.
And the story itself also did not disappoint. Watching Amelia develop even more as a ghost, becoming aware of what she can do, was fun. Especially when it came to confronting Eli. And that twist that explains everything that happened leading up to Amelia’s death, WOW. I was not expecting something like that. I’m really looking forward though to seeing how Tara deals with the fact that she’s a ghost and he’s not in following sequels. That’ll be very interesting to see.
This is one of those rare debut novels that doesn’t read like a debut, you would think Tara Hudson had published many other books. Hereafter is a great beginning to what I’m sure will be one of my favorite YA paranormal series for quite a while to come. I’d definitely recommend it to anyone who reads YA in general.