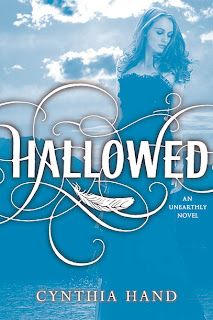 Summary from Goodreads:
For months part-angel Clara Gardner trained to face the raging forest fire from her visions and rescue the alluring and mysterious Christian Prescott from the blaze. But nothing could prepare her for the fateful decisions she would be forced to make that day, or the startling revelation that her purpose—the task she was put on earth to accomplish—is not as straightforward as she thought. Now, torn between her increasingly complicated feelings for Christian and her love for her boyfriend, Tucker, Clara struggles to make sense of what she was supposed to do the day of the fire. And, as she is drawn further into the world of part angels and the growing conflict between White Wings and Black Wings, Clara learns of the terrifying new reality that she must face: Someone close to her will die in a matter of months. With her future uncertain, the only thing Clara knows for sure is that the fire was just the beginning.

Now this isn’t guaranteed for every series I read, but a good deal of the time I like the second book even more than the first. Unfortunately, this was not the case. But don’t get me wrong, I still loved this book, just slightly less than Unearthly. And the sole reason for that will be explained in a bit. First I want to talk about what I did like.
First of all, WOW. I did not expect the story to take the turns it did. I still don’t know how this will affect the story going into book three. Let me just say that unless your heart is made of ice, this book will make you cry. But before that it’ll tease you with what it wants you to think before saying NOPE! This is what really happens. Ah well. Because of this event new characters were introduced, one of which I really enjoyed and think will be a good presence in Clara and Jeffrey’s life. I was also pleased to learn the reason behind the way Jeffrey was acting in the end of Unearthly and most of Hallowed. I very much hope to see more of him and his part of the story.
Now to the part I didn’t like. Lack of Tucker! He snuck his way into my heart in Unearthly, but I felt as if he was just pushed aside in Hallowed. An after thought. I’ll admit it was kind of nice seeing more of Christian and getting to know him better than we did in Unearthly, but I am firmly team Tucker. I hope this is rectified in the next book. I also liked that while Samjeeza made a return, there wasn’t really a lot of action in the good guys vs villain department. Some possible build-up, but besides one incident that further pushes Tucker away, there wasn’t anything like the big fire and fighting the bad guy. Just a lot of research, done mostly by Angela.
All in all, it was almost right up there with Unearthly, nearly even. This series is definitely my favorite angel series out there, especially since it focuses mainly on the angels themselves, and not necessarily God and religion. I know that in reality you can’t have one without the other, but this is fiction so anything goes!