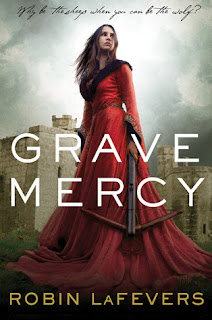 Why be the sheep, when you can be the wolf?


Seventeen-year-old Ismae escapes from the brutality of an arranged marriage into the sanctuary of the convent of St. Mortain, where the sisters still serve the gods of old. Here she learns that the god of Death Himself has blessed her with dangerous gifts—and a violent destiny. If she chooses to stay at the convent, she will be trained as an assassin and serve as a handmaiden to Death. To claim her new life, she must destroy the lives of others.


Ismae’s most important assignment takes her straight into the high court of Brittany—where she finds herself woefully under prepared—not only for the deadly games of intrigue and treason, but for the impossible choices she must make. For how can she deliver Death’s vengeance upon a target who, against her will, has stolen her heart?

I have never had a 500+ page book read so fast. This book was a masterpiece. T he only thing I didn’t like about it was that we didn’t get to see Sybella and Annith hardly at all, but I think that’s because each of them will have their own book in the series. Robin LeFevers’ Grave Mercy is for young adults what Jacqueline Carey’s Kushiel series is for adults. Deeply cunning, pieced together masterfully. I could not put this book down.

The people in this book were astounding. Gavriel Duval is one of the most yummy male characters in books today. I loved how there was instant animosity between him and Ismae, and then they grew slowly to have feelings for each other. Ismae was awesome as well. Strong and definitely able to think for herself, I love what she chooses it in the end. I would have loved to have seen more of Gavriel’s men, de Lornay and Beast because they made every part they were in fun to read. I love when supporting characters are just as developed as main characters and they definitely added to the enjoyment of this book.

The first chapter or two probably my least favorite, but necessary in setting up this story. After that though once this beast of a book gets moving, it doesn’t stop. Despite how big it is, it never once slowed or got boring. In fact I wouldn’t have minded it being just a tad bit bigger if we could have had more romantic scenes between Ismae and Gavriel. The story itself is just mindblowingly good. It always amazes me when I read stories with such deep laid conspiracies, and I’m never able to figure them out until thing are revealed. I like when I can’t figure it out, though some people might be able to predict what will happen.

Grave Mercy is pretty much perfect, for me. This is definitely taking the spot for favorite read of 2012 so far. If you like historical fiction in general, but loved the original Kushiel trilogy by Jacqueline Carey, Grave Mercy is definitely for you.

Review: The Girl in the Steel Corset by Kady Cross