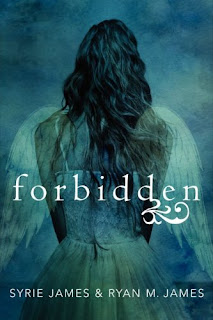 She should not exist.

He should not love her.

Claire Brennan has been attending Emerson Academy for two years now (the longest she and her mom have remained anywhere) and she’s desperate to stay put for the rest of high school. So there’s no way she’s going to tell her mom about the psychic visions she’s been having or the creepy warnings that she’s in danger.

Alec MacKenzie is fed up with his duties to watch and, when necessary, eliminate the descendants of his angelic forefathers. He chose Emerson as the ideal hiding place where he could be normal for once. He hadn’t factored Claire into his plans. . . .

Their love is forbidden, going against everything Alec has been taught to believe. But when the reason behind Claire’s unusual powers is revealed and the threat to her life becomes clear, how far will Alec go to protect her?

You know, this was a good book. Not a great and gripping read though. It took me a little longer to read this, especially once I got another book I was itching to read. But I did enjoy Forbidden. It’s another angel book with it’s own twist on angel lore, which I love reading about. I can’t get enough of angel books.

One thing I noticed while reading is that this is a pretty sizable book, but a lot was happening. Every now and then you come across these chunksters, huge monsters of a book but while you’re reading things get dragged out so that when you’ve finished you’re like “What did I just read and how did it take up that many pages?” Well, I didn’t have that issue with Forbidden. I’m quite happy with the length and for the most part all the major events aren’t dragged out. There are some small parts that were, but they’re small.

I also really enjoyed the fact that the authors did not use insta-love/attraction/lust with their main characters, as least not wholly. Alec was instantly attracted, but Claire took a while to warm up to him because of his standoffish first appearance. One thing I didn’t like though was that once she started becoming attracted to Alec her other crush just went out the window, even though it had been around for two years. And while her change of affection wasn’t instant, it was just a tiny bit faster than I would’ve liked, given the size of the book.

They’re both fun characters though, and Claire especially is a strong protagonist. You have all this crazy stuff happening to you all of a sudden, but still manages to keep her cool and take everything in stride. Claire’s friends are awesome and quirky. If this turns out to be a series, I definitely hope we see more of them later on. I wasn’t all that thrilled with the long term crush of Claire’s, since he seems to suddenly notice and pay attention to her, when he never did before Alec’s arrival.

Overall, I definitely did enjoy this book. I loved that it was told through Claire’s and Alec’s viewpoints, switching back and forth each chapter. If you love angel books, I would definitely recommend this to you, and to any paranormal fan.