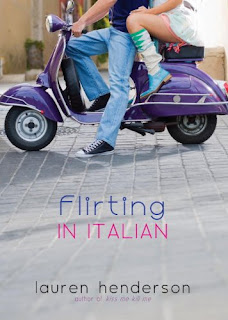 I could not put this book down. I was in love with Flirting in Italian.Years ago I took a People to People student ambassador trip to three European countries, and Italy was one of them. This book makes me want to go back so much.
Lauren Henderson does a great job of writing young sexy Italian men. I couldn’t get enough of Luca. Especially the interactions between Luca and Violet. There was insta-attraction, which I think is better than insta-love. And it felt realistic since every time Violet is talking to herself in her mind about Luca, it was the exact same way I’ve done with boys I was into in the past. If for nothing else, read this book because of Luca. He’s too sexy a character to pass up.
The other characters in this book were done well too. I liked how it seemed the four girls might not get along at first, and were then given a common enemy. It would’ve been nice to explore why Elisa is the way she is though, and maybe see all of them start to get along, but that could happen in the next book. I was surprised at what was revealed about Catia, Elisa’s mom. Scenes with Leonardo and Andrea were few, but they were fun ones to read and I hope to see more of those two.
The story was great. Except for a few too many inner dialogues for Violet, the story moves along nicely and is well written. The only thing I was disappointed about was not learning more about Violet and that painting of the girl she looks like. But from the way the book ends it looks like that will explored in the next one, so it wasn’t a huge issue. Especially since there were plenty of sexy Italian boys.
Flirting in Italian is a fantastic summer read and will definitely make you want to go to Italy for your own adventure. I cannot wait to get my hands on the next book coming out in 2013.

4 Responses to “Review: Flirting in Italian by Lauren Henderson”