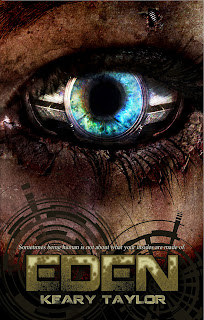 Summary from Goodreads:
Eve knew the stories of the Fall, of a time before she wandered into the colony of Eden, unable to recall anything but her name. She’s seen the aftermath of the technology that infused human DNA with cybernetic matter, able to grow new organs and limbs, how it evolved out of control. The machine took over and the soul vanished. A world quickly losing its humanity isn’t just a story to her though. At eighteen, this world is Eve’s reality.

In their Fallen world, love feels like a selfish luxury, but not understanding what it is makes it difficult to choose between West, who makes her feel alive but keeps too many secrets, and Avian, who has always been there for her, but is seven years her senior.
The technology wants to spread and it won’t stop until there is no new flesh to assimilate. With only two percent of the human population left, mankind is on the brink of extinction. While fighting to keep Eden alive, Eve will discover that being human is about what you will do for those you love, not what your insides may be made of. And even if it gets you killed, love is always what separates them from the Fallen.

This was one of those books that when I needed to put it down to do something else, like work, I really didn’t want to. Even a few days after having finished Eden it still pops up in my mind once or twice a day. I almost feel as though I had really visited this world, that’s how well Keary Taylor has crafted her story.

Eve was a very interesting character, and I loved going with her on her journey of discovering her humanity. And then we have the two male leads, Avian and West, forming a love triangle that threatens to overwhelm Eve. Now normally with love triangles I don’t pick who I’m rooting for until I’ve gotten to know both characters better, but this time I immediately chose Avian. Although that might be because I’m closer in age to that character. But he also was pretty dreamy. I will not say who she ends up with though, you’ll have to find out for yourself!

The world itself was amazing. As I read I could picture it in my mind like a movie. Given the rate our technology is developing, this could be based in reality. And the writing was very well done. I hate to say it, but often times with self published novels I’m wary on reading them, just because they don’t always have the best writing or editing. But Keary did an amazing job throughout most of the novel. The only thing that bothered me was near the end when everyone kept saying things quietly. But that didn’t take away from my overall enjoyment of the book since it was in such a small section.

Now, let’s get on to the giveaway. Keary has generously given me the opportunity to give one lucky winner the chance to win a signed copy of Eden! Here are the rules for entering:

THIS GIVEAWAY IS NOW CLOSED, WINNER WILL BE ANNOUNCED SOON!