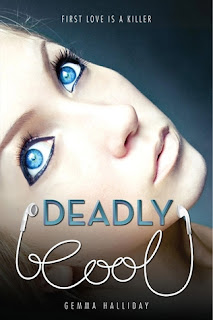 Summary from Goodreads:
Hartley Grace Featherstone is having a very bad day. First she finds out that her boyfriend is cheating on her with the president of the Herbert Hoover High School Chastity Club. Then he’s pegged as the #1 suspect in a murder. And if that weren’t enough, now he’s depending on Hartley to clear his name. Seriously? Not cool. But as much as Hartley wouldn’t mind seeing him squirm, she knows he’s innocent, and she’s the only one who can help him. Along with her best friend, Sam, and the school’s resident Bad Boy, Chase, Hartley starts investigating on her own. But as the dead bodies begin to pile up, the mystery deepens, the suspects multiply, and Hartley begins to fear that she may be the killer’s next victim.

I’ve never actually watched Veronica Mars, so the comparisons for these two is not what originally drew me to Deadly Cool. It was the comparison to Pretty Little Liars. I haven’t read those books yet, but I’ve seen the show and loved it, so I was excited when I received this book. The first sitting I read nonstop until I was 99 pages in, and the second sitting I finished the book, that’s how awesome it is.

Hartley. Where to begin with her. I need to start making a list of my favorite female protagonists that feel so real, definitely have their own personality. Hartley is one of those characters you’re going to remember long after you’ve finished the novel. Chase, the main male protagonist is also one to remember. He has that bad boy image of dressing all in black with even black hair, but he’s not actually bad. Sam is Hartley’s best friend, and she was an awesome supporting character. She helps out Hartley however she can during their own investigation of Josh, Hartley’s ex-boyfriend. There was one line in particular she said that had me laughing out loud. The following quote is from page 224 of the advance reading copy and is subject to changes for the finalized version.

“Caw! Caw, Hartley, caw!”
Chase narrowed his eyes again. “Sam?”
I nodded. Then crossed to the window again and called down to Sam. “You can quit squawking. He caught me.”
“He’s not murdering you or anything, is he?”

Sometimes books have blurbs that say laugh out loud funny, and most of time I end up not laughing out loud, though I might find something amusing. There were many times with this book that I did laugh though. Gemma has an awesome sense of humor. She was also excellent at keeping me guessing on what would happen next, and who the killer really was. I was surprised at who it turned out to be, but then again not so surprised just because once it was revealed it made so much sense. I kind of kicked myself for not seeing it before.

Gemma Halliday’s debut novel was definitely a fun read, and one of my favorites for 2011. She has pretty much guaranteed that I’ll be reading anything she publishes, especially if future novels have as much action and humor as this one.