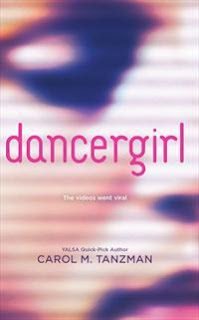 Summary from Goodreads:
Ali Ruffino loves to dance. When her friend posts videos of her online and they go viral, she thinks her unexpected fame might propel her straight to center stage. But along with some real admirers she gets some nasty detractors—and a stalker who isn’t content to watch from afar.

Dancergirl is an explosive read that will grab you from the very beginning and not let go until you’ve read the last page. I read this in one sitting.

I’ve never been into dancing, whether I’m doing the dancing or just watching it. But I wanted to read this because it sounded interesting, and I always love reading about a character that is passionate about this one thing they’re doing. I would suggest reading this near a computer if you’re unfamiliar with dancing jargon, which I was. That did make the actual dances hard to imagine, but she used great detail as well, so I wasn’t completely in the dark.

As for the rest of the book, wow. Every single Ali was feeling paranoid and or frightened because of the paranoia, I felt it. Carol Tanzman wrote those scenarios well, because usually I find it hard to connect with a character in that situation, so I don’t always feel the tension that is present. And boy, was there tension. It’s incredibly creepy to think someone is watching every detail of your life. Ali handled it all amazingly well, as did all of her friends who helped her figure everything out. Sonya, Clarissa, even Charlie, all great supporting characters.

Then there’s the absolute best friend Jacy, who all of a sudden dumps everyone, but then all of a sudden reappears. And while there was an explanation for that, the reappearance was a bit too sudden, but I’m glad it happened. There is a hint of romance in the story as well, though it’s definitely second fiddle to the overall storyline of Ali being stalked.

All in all, Dancergirl was definitely gripping, and I’d suggest reading it during the daytime, and not in the middle of the night like I did. Very good story, but extremely creepy because it does happen, too often.