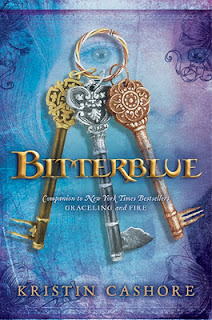 I’m not gonna lie, it’s been a few years since I read either Graceling or Fire. And since I have so many books I want to read, re-reading books is no longer a priority when new sequels come out, unfortunately. Maybe if I had reread Graceling, and even maybe Fire, I might have loved Bitterblue. As it was though, I only liked it. Fair warning, this review does contain spoilers, so if you have not read it yet, please do not highlight the next paragraph. It has been whited out so that you will not be spoiled.
I felt like there was a love triangle, only a weird one. Bitterblue was obviously attracted to Sapphire, but was anyone else rooting for Giddon? Because I sure was. Even if that age gap of only 8 years, they were pretty much able to be honest with each other about everything, even if Giddon had to wait until after doing something to be honest about it. And they obviously cared for one another. As much as I liked Sapphire, and I did, I am team Giddon all the way.
Other than that though, the story was interesting, if a bit dull and dragging at times. This book is huge, and crams so much into it. But still parts drag here and there. But when it’s revealed what is happening, it’s horrifying how deep Leck’s control is, even years after he is gone. If you just stop and think, you are disgusted at what’s happening, but heartbroken for these people at the same time, because it’s not really their fault.
At the end, I have to say my first thought was “I’VE DONE IT!” I’ve completed this monster of a book. Goodreads informs me that it is the longest I have read so far this year, shoving Insurgent out of that spot. I was glad to visit this world again, and would definitely love a sequel to Bitterblue detailing what happens in her 20s maybe, when she has a few more years added on to her reign. Just maybe not quite this size.