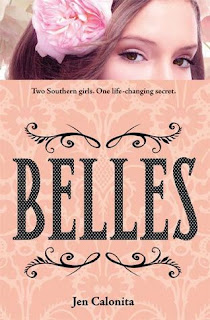 Fifteen-year-old Isabelle Scott loves her life by the boardwalk on the supposed wrong side of the tracks in North Carolina. But when tragedy strikes, a social worker sends her to live with a long-lost uncle and his preppy privileged family. Isabelle is taken away from everything she’s ever known, and, unfortunately, inserting her into the glamorous lifestyle of Emerald Cove doesn’t go so well. Her cousin Mirabelle Monroe isn’t thrilled to share her life with an outsider, and, in addition to dealing with all the rumors and backstabbing that lurk beneath their classmates’ Southern charm, a secret is unfolding that will change both girls’ lives forever.
Warning: If you have the finished copy of this, DO NOT LOOK IN THE BACK UNTIL YOU ARE FINISHED WITH BELLES! There is a summary for the second book that could totally spoil you. I know because it spoiled me somewhat. Though that did only make me want to read it even more to see how stuff was revealed.
Anyways, THIS BOOK WAS AMAZING. As I know I’ve mentioned I do most of my reading at work on breaks, but this one I dug into and spent one evening doing nothing but reading Belles because it was that good. I love the southern atmosphere it conveyed. And the people. I don’t read contemporary too often, maybe once every other month on average. But these characters felt so real. And I felt like I was actually there while reading.
Izzie is amazing. She grew up faster than she should have had to to take care of her grandmother. She’s strong. Mira pissed me off most of the time, just because she’s so selfish. She does redeem herself a little bit at the end, just a little bit. I’ll be interested in seeing her character grow more in the second book after learning something shocking. My favorite character though was Mira’s brother Hayden. He’s just got everything together, and was one of the most welcoming when Izzie joined the Monroe family.
There was romance for both Izzie and Mira, and it was sweet. But it didn’t overshadow the overall story, which was nice. I’d definitely recommend this to anyone who loves contemporary young adult books, especially if you love southern settings! I’m seriously stoked for Winter White, which will actually get into the cotillion season, and I love those kinds of things.

One Response to “Review: Belles by Jen Calonita”