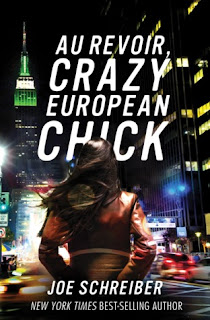 Summary from Goodreads:
Perry Stormaire is a normal high school senior– he is busy applying to college and rehearsing with his band –until he agrees to go to the prom with the Lithuanian exchange student who is staying with his family. It turns out that Gobi Zaksauskas is not the mousy teenager that she seems but rather an attractive, confident trained assassin. Instead of going to the prom, Perry finds himself on a wild ride through the streets of New York City as Gobi commandeers the Jaguar his father lent him for the prom in order to take out her targets. Perry learns a lot about himself – and ends up with some amazing material for his college application essays.

I started this, and I have to be honest, the first couple of chapters did not pull me in very well. I almost decided to not read it and send it on to the next person. Since it’s such a short book though I decided I’d go ahead and finish it. I’m glad I did, because once the story really starts it got fun to read.
First of all, what I really liked was the length of this book. It’s short, only 192 pages. Which meant the author didn’t add in any unnecessary plot points to cushion the story, nothing felt contrived. Perry was an interesting MC once you dig into this story, you watch him grow up throughout all the situations he’s put in over the course of one night. Gobi was interesting as well, but I didn’t really connect with her, just because we really didn’t see much of her besides her being a ruthless assassin. I understood her motives, but I would’ve liked to know more about her as a person.
The pacing was slow in the beginning, but once things got started, they kept on moving and didn’t stop until the last page. The tension and suspense is there in every paragraph, and keeps you wanting to know what’s going to happen next. What was also cool was how the chapters started with questions from college admissions applications, though I don’t know if those were from real colleges or not. But each question was somehow answered throughout the chapter it had started.
I will warn you guys though, that this book has violence in it. A lot of violence, and some not so good outcomes from that violence. If you’re squeamish at all, I’d avoid this. But if you want a fun and suspenseful adventure, than this is your kind of book.