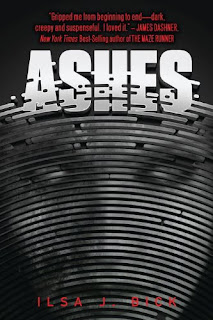 Summary from Goodreads:
It could happen tomorrow . . .

An electromagnetic pulse flashes across the sky, destroying every electronic device, wiping out every computerized system, and killing billions.
Alex hiked into the woods to say good-bye to her dead parents and her personal demons. Now desperate to find out what happened after the pulse crushes her to the ground, Alex meets up with Tom—a young soldier—and Ellie, a girl whose grandfather was killed by the EMP.

For this improvised family and the others who are spared, it’s now a question of who can be trusted and who is no longer human.

Author Ilsa J. Bick crafts a terrifying and thrilling novel about a world that could be ours at any moment, where those left standing must learn what it means not just to survive, but to live amidst the devastation.

I haven’t read very many zombie novels, if any, just because the idea of zombies just really creeps me out for some reason. I watched The Walking Dead a few nights ago and had to watch something happy just so I wouldn’t have any bad dreams. End of the world type things also freak me out, but that doesn’t stop me from reading books like this, or watching movies. This one seemed like it would be good so I thought I’d give it a try. I’m glad I did because I definitely enjoyed it!
I absolutely loved the first half of the book. When the pulse happens and Alex meets up with first Ellie, and then Tom. Ellie was definitely annoying at first, but eventually she grew to realize the importance of what had happened, and grew up just a little bit. Tom was an interesting character. On the one hand he cares about Ellie and Alex and wants to protect them, but on the other hand he’s keeping secrets from them. He’s not fully developed before the novel pulls a big switch and seems completely different. Alex is separated from both and we’re introduced to a whole town full of new characters. This did kind of disrupt the flow for me, but overall it works. And adds in a new degree of horror when the truth of the town is revealed.
I am confused on the age thing and what makes certain people zombies, why some just drop dead, and others aren’t affected at all. so I’m hoping that Ilsa fleshes that out more in the sequel. And I’m definitely wanting to know what Alex will do about Rule and what they’re doing. Another thing I’m confused on is the love triangle. Yes, there is a love triangle in Ashes. Tom takes up the first half of the book, and Chris takes up the second half. Honestly, by the end I didn’t know who I was rooting for, which is unusual for me. Ninety-nine percent of the time I choose right off the bat which character I like more. What I would have done with Ashes was choose Tom, but then Chris comes with his own brand of warped awesome and it just created confusion.
What I absolutely loved about this book though was that Ilsa J. Bick was not afraid to go to the hard places with her story. Like I said, this is a zombie story so it is a given that there are gruesome parts. But there were also parts when the those humans that are left become less human because of their actions in trying to survive. This is a survival tale, and she wasn’t afraid to let that show in the story. It’s an interesting thought that were a zombie apocalypse of some kind were to happen, this is just one way of seeing what that future would be like.