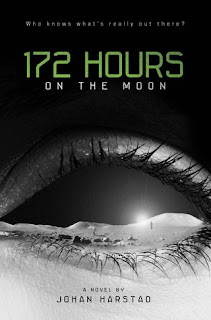 It’s been decades since anyone set foot on the moon. Now three ordinary teenagers, the winners of NASA’s unprecedented, worldwide lottery, are about to become the first young people in space–and change their lives forever.


Mia, from Norway, hopes this will be her punk band’s ticket to fame and fortune.


Midori believes it’s her way out of her restrained life in Japan.


Antoine, from France, just wants to get as far away from his ex-girlfriend as possible.


It’s the opportunity of a lifetime, but little do the teenagers know that something sinister is waiting for them on the desolate surface of the moon. And in the black vacuum of space… no one is coming to save them.


In this chilling adventure set in the most brutal landscape known to man, highly acclaimed Norwegian novelist Johan Harstad creates a vivid and frightening world of possibilities we can only hope never come true.

I was bored for the first half of this book. I didn’t think I’d end up liking it at all, which was sad since I had really been looking forward to this. By the end though it was okay, but only because it did manage to creep me out. Seriously, the second half was so creepy.

For the most part, the book seemed choppy. Back and forth between different characters every single chapter and it was sometimes hard to tell who’s POV you were reading at first. And even though we’re given information about the characters, I still didn’t connect for some reason. I didn’t feel for them.

Another thing that bothered me was the lack of tension building. The cover hints at something ominous, as does a chapter here or there throughout the first half of the book, and yet tension still wasn’t building for me. Not until they actually got to the moon and then it was like BAM everything happening all at once. First slow pacing and then super fast pacing. The last third of the book was extremely creepy, but still left me a little confused. One critical question I had was never answered as far as I can tell so I don’t even know how the end came about really.

Overall, I think for me at least something may have just gotten lost in the translation of this book. I think it would have maybe been better as a movie instead of a book. I would suggest borrowing this if you’re interested in reading it.

2 Responses to “Review: 172 Hours on the Moon by Johan Harstad”