I’ve been into anime and manga for many years now, probably over 10 years. Manga I’ve only mostly been into for the last 6 or so years though, and I go through phases with it. Right now I’m definitely in the I want to read manga phase, so I’m announcing my plans to participate in Alison’s Manga Monday meme! I’ve been buying a few volumes lately and starting new to me series that I’ve been wanting to read for a while now. Here’s a picture of what will be featured that you can look forward to in the next few weeks! 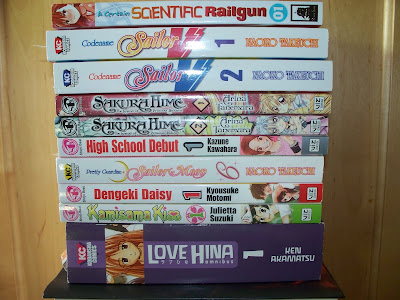 And I’ve got more coming in next week! I may double up some weeks on Manga Mondays, but we’ll see. I’ve already finished two of those and have the next volumes coming so they’ll be in next weeks IMM. Can’t wait to get started!